They say begin every task with something auspicious. So here goes.. The first thing I'd ever post here would be something to do with the holy River Ganges.

A short break from work saw me pack my bags to visit one of the oldest living cities on the planet, Haridwar, alternatively called Hardwar. This place is one that you should visit, whenever you feel you need a spiritual awakening. The chaos around the place, and yet an order that exists in the madness is something that strikes you at the very beginning.

You can find all kinds of people here- the retired old school teacher who has decided to visit for a dip in the Ganges, the mother whose eyes gleam with tears as her son has finally fulfilled her lifelong dream of watching the Ganga Aarti, and of course the Westerners, who have heard a lot about Indian culture and just want to soak in some of it. I make friends with this little boy who follows me around with his "camera", as I walk around with my own, capturing whatever I find interesting.

Self styled Godmen greet you with "Hari Om", with arms slightly outstretched, but not too so.The river Ganga is not only a source of water, but also a source of livelihood for many. Take for example, those who sell cans, just so you can fill it up with the Ganga water and take back home. Or the girl who sells ready-made floats, calling out loudly to anyone who passes by. 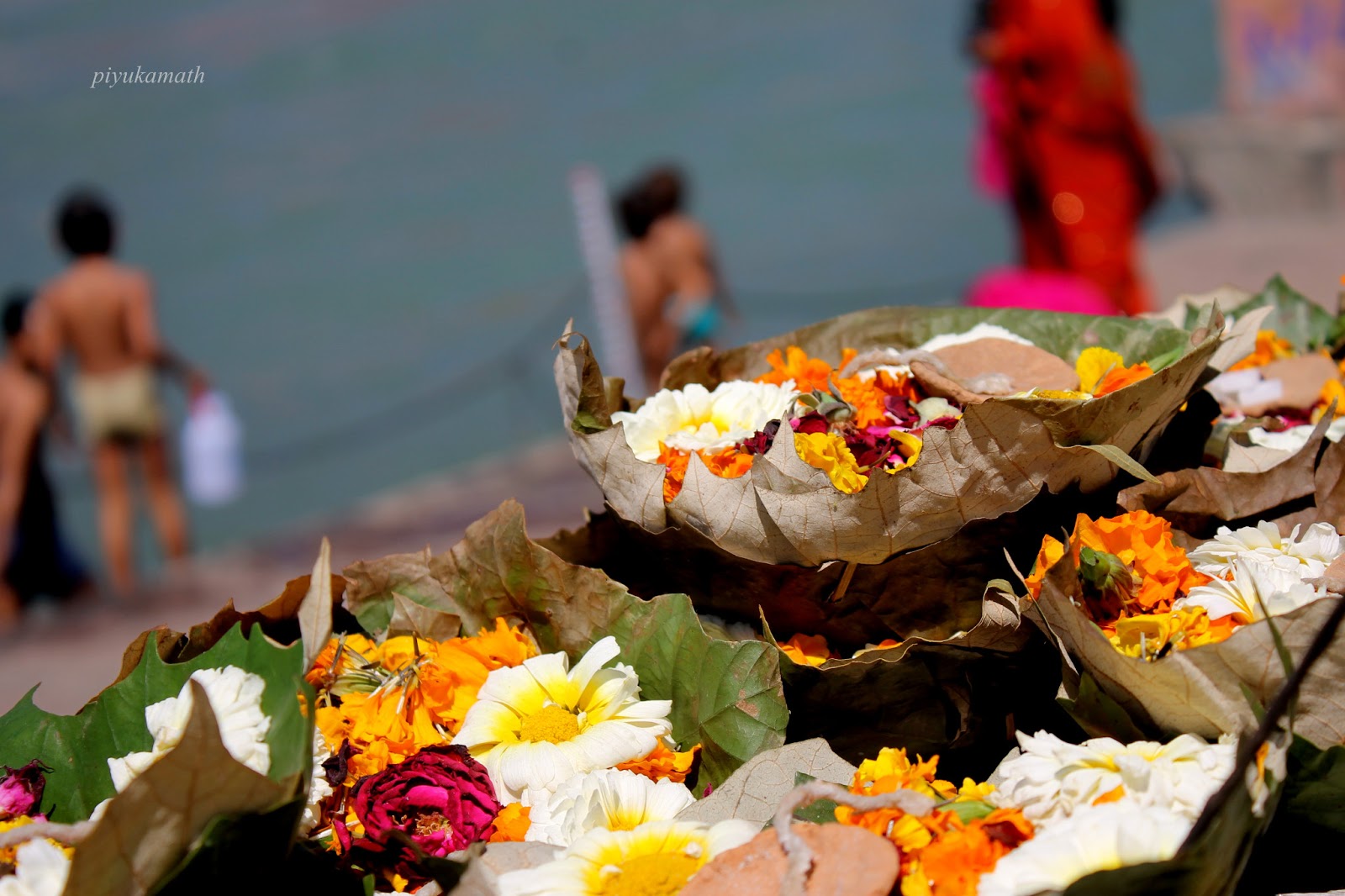 The melee at Har ki Pauri at noon is amazing, which just makes me wonder what the Kumbh Mela would look like. People, and more people everywhere; people in all shapes and sizes. Mothers giving their infants a dip in the cold water, oblivious to the fact that her kid might actually be mentally cursing her ! A group of Shaivites singing in praise of Lord Shiva under a tree by the river, a guy tells me they have been doing so from twelve hours.


As the evening begins to fall, people around the place throng towards one point, Har ki Pauri. Everyone aims to occupy the area right opposite the banks, from where the Aarti will be performed. Officials who claim to be so, walk about seating everyone, and collecting offerings. And then there are the others, who consider it their right to ask money from others.
People begin to float Diya's, praying for their ancestors. 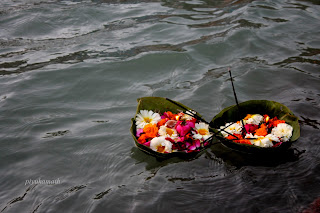 Priests clad in deep saffron descend on the the steps at Brahma Kund, the most sacred of the ghats around Haridwar. And the much awaited Aarti ceremony begins. Loud blaring loudspeakers are set up everywhere. Chants in praise of Ganga Maiyya are recited. An elaborate pooja is performed, with colored powder being sprinkled into the water. 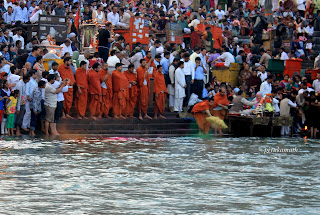 As the chants draw to an end,  Pundits clad in white with beige waistcoats assemble, and the first Aarti is lit. As the darkness slowly engulfs you, more Aartis are lit up. And the moment everyone has been waiting for, begins. The Pundits perform the Aarti in neatly synchronised motions, with a background score being played. The incense-filled air, the continuous clanging bells, with the beautiful sight of the evening creates an enchanting atmosphere, leaving you spell bound.

Finally, after this has continued for about fifteen minutes, the evening finally draws to an end. My ears are still ringing from the bells and the chants. People everywhere in a rush to go back, others busy posing against the backdrop of the Ganges for that one shot, and yet others, who again decide to take a dip in the water, which is afloat with diyas, big and small. I spot a bottle floating at a distance, which leaves me wondering what happened to the "Ganga Sankalp" we just took a while ago, promising to keep the river clean and not pollute it. Again, I'm surrounded by various people asking for donations and offerings, but I manage to get away without being rude to anyone.


I'm quite surprised at my own energy levels, even after the whole eventful day, I'm not tired yet. So I decide to take a walk through the narrow lanes in the market adjoining the ghats. Managing to walk through the alleyways, without being hit by two wheelers, or by passing cows is an art in itself. Having heard about this old place famous for their pooris, I decide to try it out. After a ten minute walk, that seems much longer, I come upon the place, called "Mathura Waalon ki Prachin Dukhan". The menu is quite basic, offering Poori with subzi, aloo tikkis, pedha and halwa. The pooris are served piping hot, on plates made of leaves, and the subzi is something unique. Made of pumpkin, it is sweet, yet flavored enough to taste spicy as well. 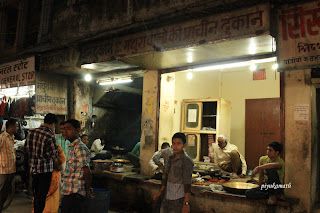 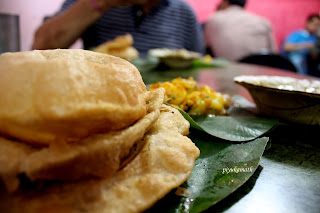 Having had my fill, I call it a day and return back to my room. Before I retire, I once again decide to have a glimpse of the Ganga, and come out to the balcony. The sight of the water gushing down, continuously, day and night, leaves me spellbound. I had come to Haridwar, skeptic, having heard how polluted the water is etc., but the crystal clear water, cool and sweet has removed all such thoughts from my mind.

I marvel at Nature's beauty. The river has been flowing since creation, and still continues to do so with the same gusto, the same energy, the same force, the same divine force. I now begin to realize why people pray to her. She is truly a Goddess. She is Maa Ganga.