on Thursday, May 09, 2013
“Are you coming for the Bhootha Kola?” was one question that was being repeated in the extended family from the past two weeks, over and over again. Everyone had their own reasons to look forward to the event, being conducted after almost 12 long years - the family elders for auspicious reasons, and we youngsters for a family get-together in the village that we would have. A night long of chatter and junk food, coupled with watching the event was something we all were waiting for. My faint memory of the Kol held last time, was as a twelve-year old sleepily watching a brightly painted man, crying out loud and running about, as everyone else watched him in awe.


Tulunadu, is the area of undivided South Canara (Dakshina Kannada and Udupi) plus a few parts of northern-most Kerala in Kasargod district. This area is famous for a few indigenous things, such as Kambla or buffalo racing, Cock Fight (which is now banned, but still continues to take place very much within the city limits), Yakshagana, and of course, Spirit Worship or Bhutha Aradhane. 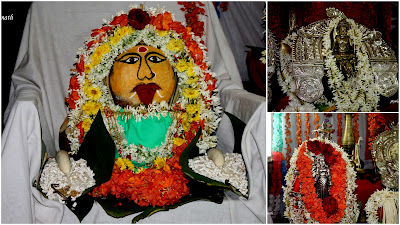 Spirit worship refers to the worship of certain forces or supernatural spirits, who are believed to guide and protect the believer in times of adversity. They are Demi-Gods, who people look upon as a guardian angel, upon whom they can rely on, no matter what. Various spirits or ‘Daivas’ are worshipped, such as Satyadevate, Varthe - Panjurli, Jumadi-Banta, Mantradevate, Kordabbu, Guliga etc. There are stories that describe their heroism, and how they came to be worshipped.

Bhootha Kola is a night-long ceremony held to invoke, worship and many a times, to ask for advice on various matters, ranging from family issues to property disputes.  It is said that the advice or judgement given thence, was even considered valid in the court of law during British times.

The area is brightly decorated with flowers, mainly jasmine and firecracker flower (Abbolige / Abboli) and alike, and also brightly lit. The various idols are placed in the tent, and traditional designs are drawn around. 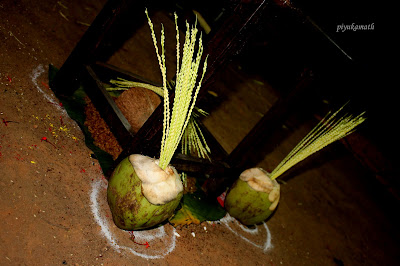 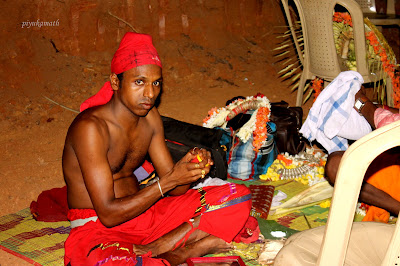 A man acts as the medium for the Spirit to temporarily occupy. The evening begins with the artiste carefully applying the indigenously prepared bright colors on his well-oiled face and body, and dressing up with traditional jewelry and clothes.

There are specific communities who take up the task, with different communities for different spirits. The female members of their families recite songs and ballads in praise of the Spirit which will be invoked as the make-up is being applied. 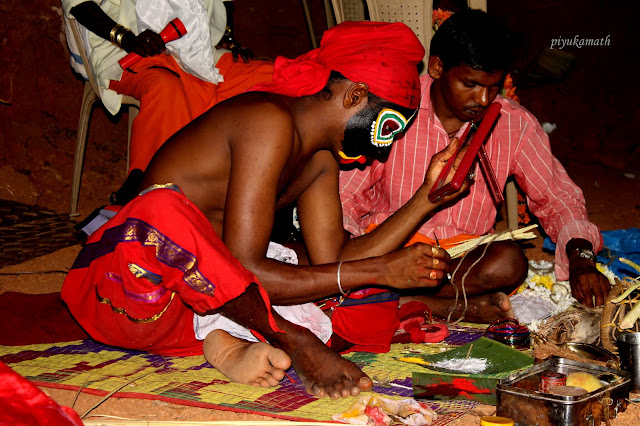 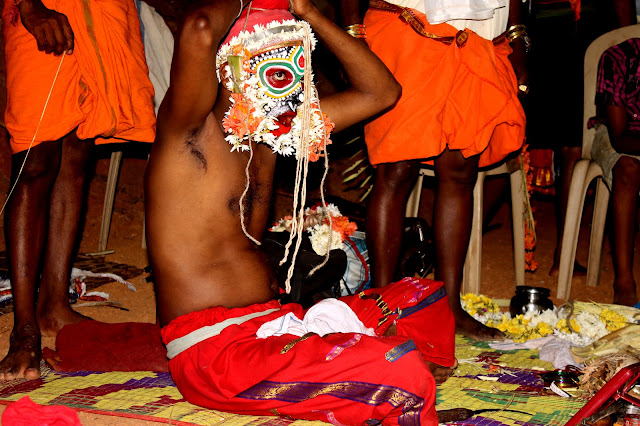 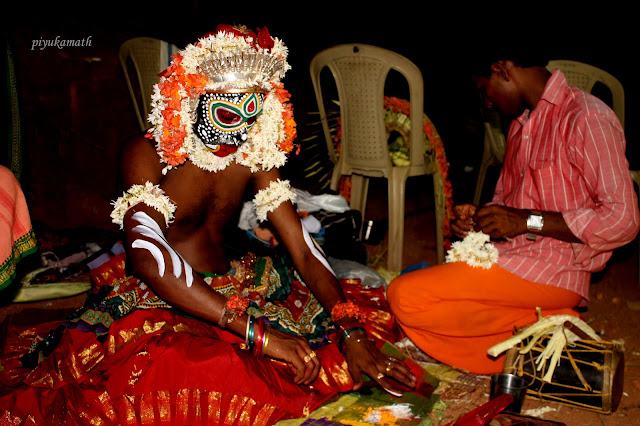 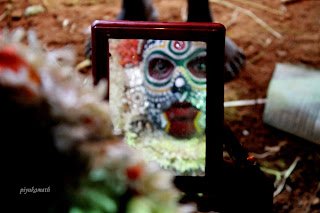 The music of drums and the wind instruments, is hypnotizing and bewitching by itself. Quickly alternating between slow paced and rapid beats, it is enough to get anyone on his feet. As the initial beats start, the artiste slowly goes into a trance like state, followed by a dance, which is quite in tune with the beats. As the beats quicken, so does the dance, so that by the end of one cycle, he is wildly running about, with loud war cries. 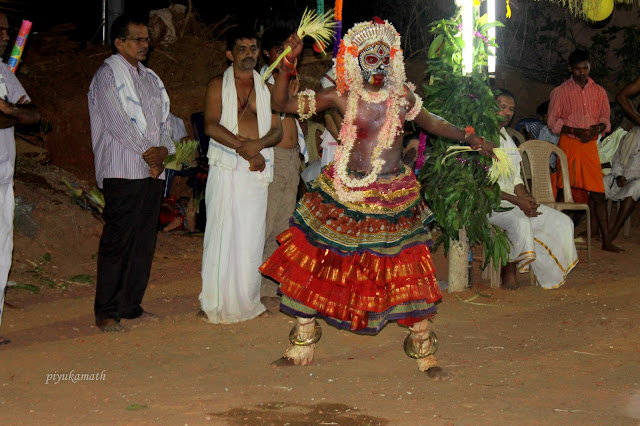 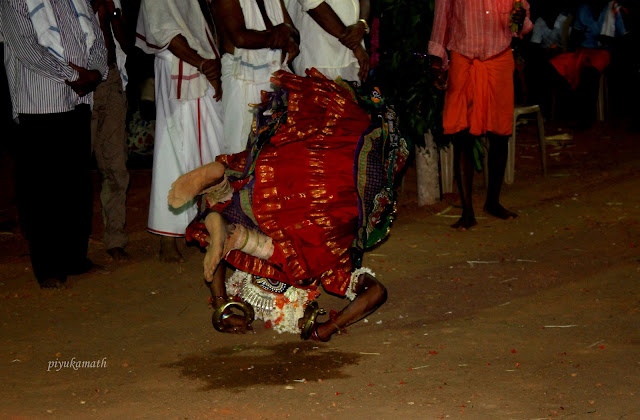 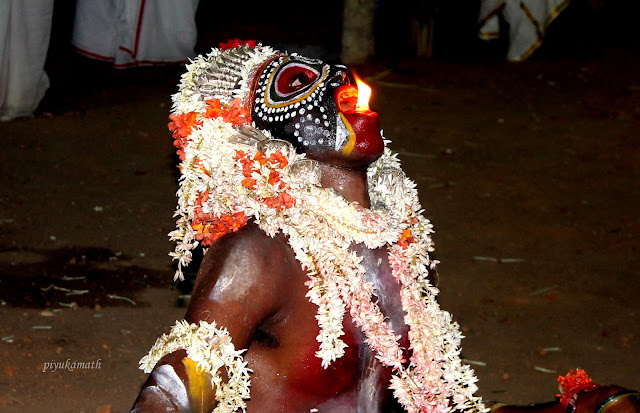 He presents himself in front of each male member of the family, putting a burning camphor on his tongue, and a respectful Namaskaar. At times he is angry, else he is happy, the emotions showing on his face clearly. Another person usually accompanies him, who interprets all the signs that he makes and also conducts any conversation when required.
When the final beats stop, the dance stops too, and it is time for the ‘Nudi’, for people to ask him whatever they want to. 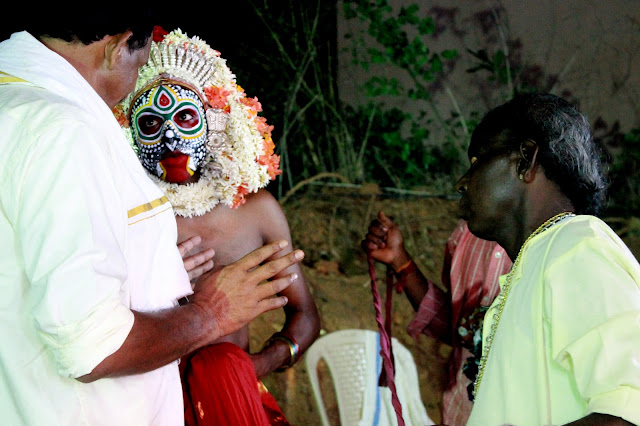 Likewise, another round of the ritual with a different set of Spirits is held. This time it is a pair of Spirits, sister and brother, called Varthe and Panjurli. 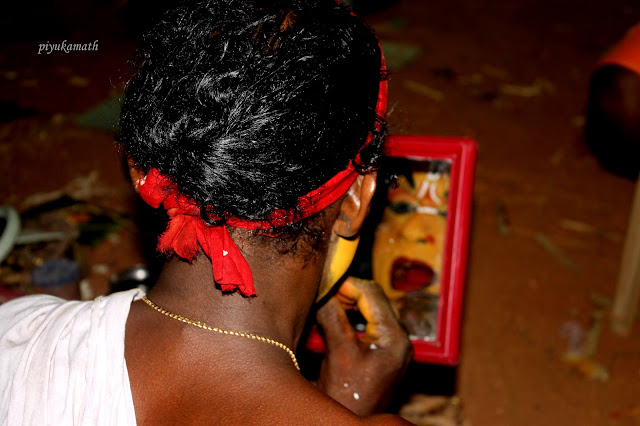 Varthe, being a female spirit is mild, while her brother Panjurli, is aggressive (representative of the boar). The cries are louder this time.


The well synchronized dance is energetic and enchanting, the beats are faster. They circle around each other, calling out each others' names. 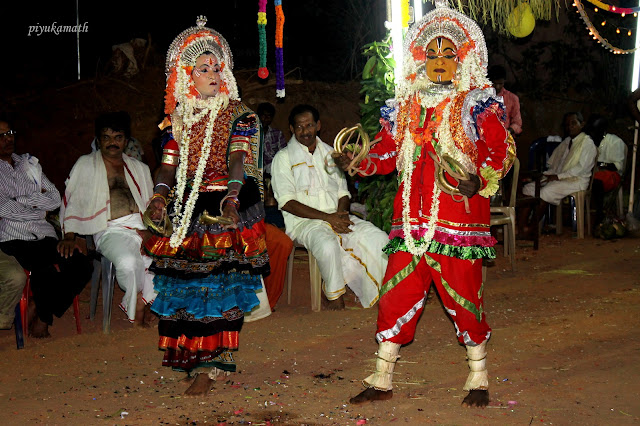 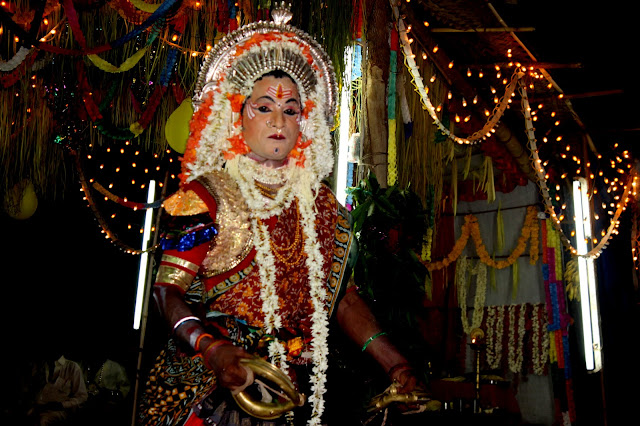 The same ritual of keeping a burning camphor on the tongue is repeated many times. But this time, the expressions are more vivid. 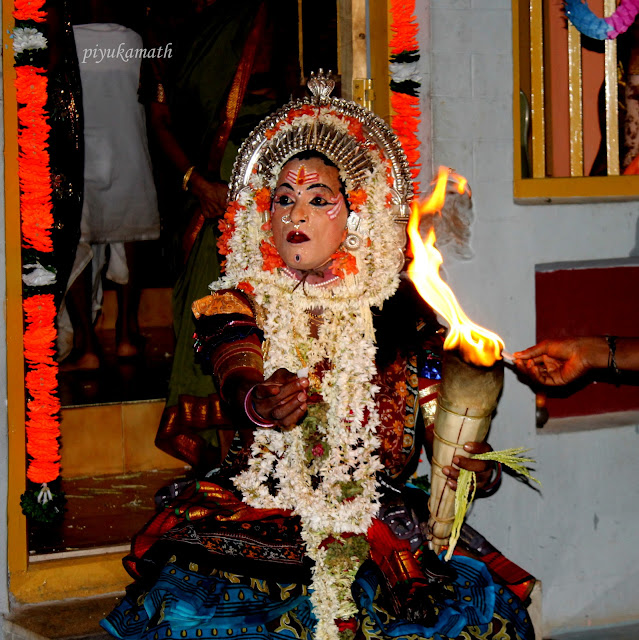 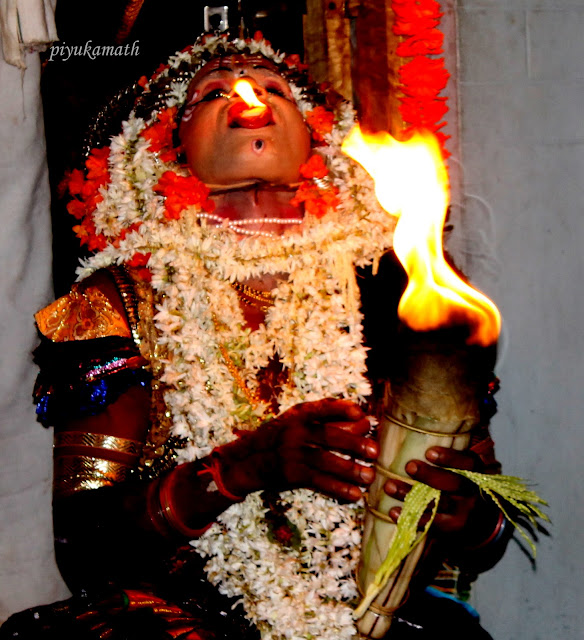 As the night draws on, people slowly doze off one after another, until a few devout ones religiously observe the ritual. I ask a cousin how we differentiate whether it is the actual Spirit talking, or if it is merely a trance-like state the artiste has gone into; I'm met with a stare that tells me further questions on the matter are not welcome.

Ultimately, it is the belief of the people, and it is not appropriate to question it, and thereby hurt their sentiment. Further questions on the matter would be considered rude, if not blasphemous. Whatever said and done, the sheer energy needed for the entire act, running into hours, at the peak of summer in May, is commendable.


We try to become more "modern", more "rational", and in the process forget our own roots. By the time we realize our mistake (read stupidity), we often find it is too late to make amendments. 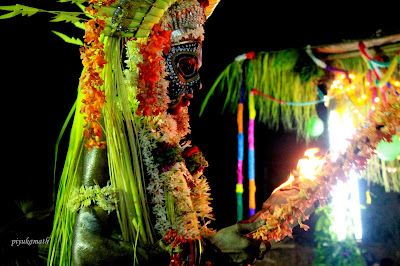 One thing we must realise is, like Yakshagana, Kambala, and other art forms, this also is a heritage that Tulunadu has been blessed with. Sadly, like the others, this is a slowly dying art, with many artistes pursuing other professions, or moving out in search of greener pastures.

Encouraging these communities to preserve the culture, and to pass it on to their children, is the only way we can ensure that this rich culture of our beautiful Canara is preserved for our future generations to see!