A Glimpse of Calcutta - II (The Hooghly)

on Tuesday, September 01, 2015
On one of the days when in Kolkata (will be addressing it as Kol henceforth), we planned to wake up early, have a quick heavy breakfast and set out for the day. I should have been a little more realistic though. I get up early only on rare occasions even when at home, then why would I when on holiday!

By the time we started, we were running behind schedule, and we went straight to Baboo Ghat (dropping the early-morning-walk-around-the-Victoria-Memorial plan), from where we took the ferry. I tried to climb on the deck and I was told ladies not allowed, so I had to content myself sitting inside the cabin below. The morning was still foggy, which meant I got very poor shots of both the bridges. Never mind, I’ll come back for more later I thought. 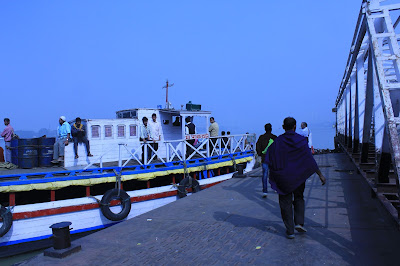 Having crossed the river, we took a cycle rickshaw ride to the Howrah station. I was kinda overwhelmed by the number of people there. We walked around for some time. The initial plan was to walk back to Kol on the Howrah bridge, which got modified into taking a taxi. I wish we’d walked though.

Having come back this side, we went to the Mullickghat flower market. Early morning would have been the best time to visit, nevertheless it was a good experience walking about. 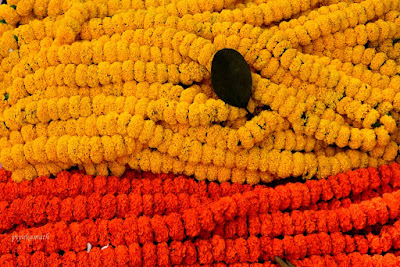 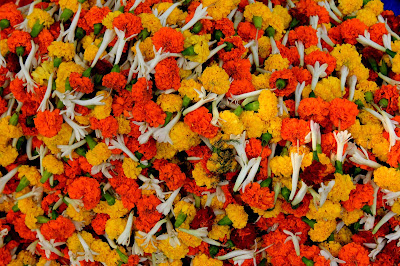 We went walking around M.G Road from there, through the markets, past various old buildings. I had expected all this would take all morning, but it was only an hour and a half since we’d left our room. So I’d to quickly plan something else. I decided to visit Jorasanko Thakur Bari next, but realized it was a Monday and would be closed. Next option was to go to Kalighat temple.

This was the only experience in Kol which I didn’t like. The moment we reached there, we were surrounded by people who looked like touts claiming to be official priests (or maybe they were priests). No amount of saying NO helped. They kept irritating so much saying they’d arrange direct darshan, poojas etc., and the queue to enter the temple appeared so long, we simply went back. Back home we’ve never faced anything like this; we just enter the temple, pray, sit for a while and leave. So this was a new experience for which we were unprepared. We decided we’d go back again someday, but that never happened.

We went to the Millennium Park in the evening, wherein we had some nice chai in earthen cups, and also got a lovely view of the sunset over the river. Dinner was a quiet affair at Piccadilly Square, the waffles were simply delicious. 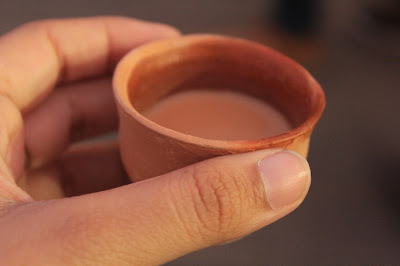