POTTER THROUGH THE AGES (Harry Potter and the Philosopher's Stone: Illustrated Edition) 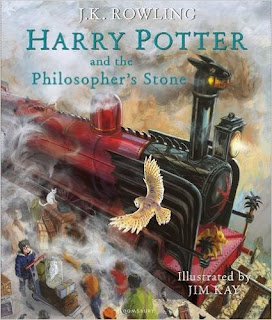 (This post is purely for Potterheads. MUGGLES STAY AWAY!)

And the wait is finally over! The much awaited blockbuster release of the year is here! The Illustrated version of Harry Potter and the Philosopher's Stone. Jim Kay has infused magic into the books, and it is almost what one would have imagined while he/she first read it.

The book is every bit of what was expected, and more. The attention to detail is mind-boggling. The way Diagon Alley, Platform Nine-and-Three-Quarters, etc. have been illustrated is brilliant. The characters look almost alive, and in many cases far more convincing than what they've been portrayed as on screen. And the reverse is also true, one couldn't have found someone better to play Draco than Tom Felton. Ron looks very freckly, and we finally get to see a Hermione with real brown bushy hair.

In short, a MUST-HAVE FOR ALL POTTERHEADS!

Reminiscing back- Mrs. J. K. Rowling has been the reason why many of us have been through a magical childhood. The impatient wait for the release of the next book of the series was filled with discussions on what could be expected to happen. The wait felt so long! And when the Order of the Phoenix came out, no one had expected such a sad ending. Many cried. And then the routine set in. The next book too ended with a death.

The final book was thinner than expected. And everything seemed to happen too fast. I remember finishing the book in one day straight just to make sure Harry didn't die (to put all the rumours to rest). I remember understanding the King's Cross chapter much later. I remember feeling so happy on having learnt that Harry had named his son Albus. Oh I remember so many things!

And those movies- how the book readers loved criticising them. About how so many scenes were changed or how many important scenes were left out. And nevertheless, we'd watch every movie the first weekend it released (and continue to do so even now every time it comes on TV!). Whatever said, the movies will never match up to the books.

When the final book was released, the feeling finally sunk  that there would be no more magic weaving out of Rowling's wand. No more waiting for the next book. And then the Illustrated series was announced! I can't describe the feeling when I first read about it.

About the book per se, it's quite big and heavy. I can't wait to see what the upcoming books would be like. The bar has been set very high, and Kay will have to live up to the expectations.

Sharing a few pictures here from the book.

A magnificient start to the Illustrated series, looking forward to the Chamber of Secrets.
And to anyone who asks, 'you still read Harry Potter?', I'd just say, Always.

Let's end with the school song:

Teach us something please,

Whether we be old and bald,

Or young with scabby knees,

Our heads could do with filling,

With some interesting stuff,

For now they're bare and full of air,

Dead flies and bits of fluff,

So teach us things worth knowing,

Bring back what we've forgot,

Just do your best, we'll do the rest,

And learn until our brains all rot.