My Cemetery Experience (A Glimpse of Calcutta III)

on Sunday, November 01, 2015
What do you call someone who spends a couple of hours walking around a cemetery that's more than 250 years old, alone?  Well, this is what I did on one of the days on my Kolkata trip last year. At the outset, Dad told me he simply wasn't interested to look around, and decided to just sit at the entrance, enjoying the cool morning air with a cup of Chai. Irritated, I walked off in a huff into the slowly darkening bowels of the cemetery, regretting my decision only moments later. Too proud to turn back (plus a li'l nervous- Granny had once told that Spirits always called you from behind), I bravely walked on.


They say people born on Halloween are mystical, and can converse with people from the Other World- the one that lies beyond the veil. So, was I subconsciously trying to put this theory to test? 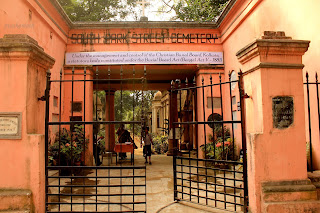 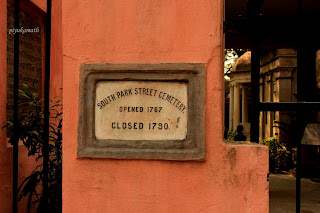 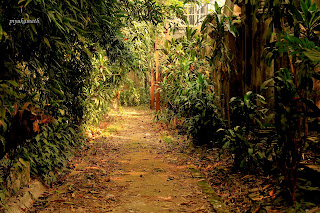 One spot, a 'must-visit'  for me, if I may say so (though I hate using such clichéd terms), was this particular place- the South Park Street Cemetery, which was functional between the years 1767 and 1790. This was mainly built for the Officers of the East India Company, and their families. It is now managed and maintained by the Christian Burial Board, Kolkata. The place is quite well kept, and most of the paths are cleared regularly.

As I slowly walked on, every creaking twig, every rustle of the trees, or even a sudden gust of air gave me goosebumps. Of course, there was nothing to worry about, I kept telling myself continuously, but then, entering a cemetery all by myself was something I'd never done before. Just the previous day, I had found myself standing over someone's grave in the yard adjoining St. John's Church, which had left me quite shaken. And today I was again in a cemetery. The crows cawing continuously only added to the entire environ around. The foliage was quite thick in places, and the sunlight merely filtered through.

After a while, the uneasiness began to abate, and the camera slowly came out. There were tombs everywhere (what else did I expect to find, duh!), tombs in all shapes and sizes- domes, mausoleums and obelisks. The architecture was again typical Indo-Saracenic but the Indian touch was not that pronounced (an observation from an inexperienced eye, I'm no architecture expert). Probably as this belonged to the mid-18th century. Some of them were quite well taken of, and some others, crumbling. It was very cool, and the air, fresh. 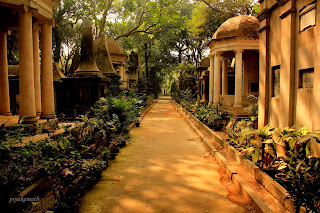 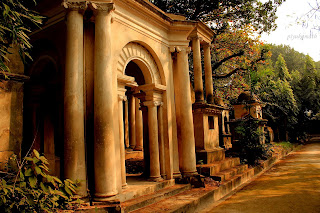 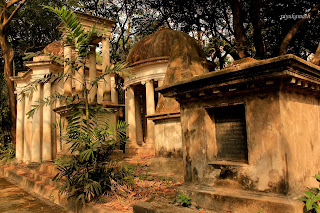 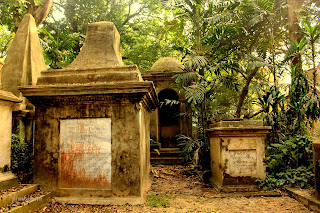 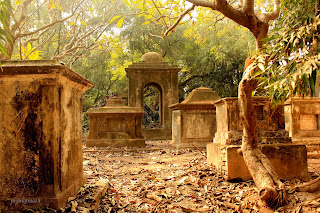 Reading the epitaphs on the tombstones was very informative, besides being very very touching. One of them even belonged to a child less than a year old. 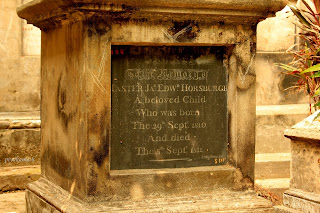 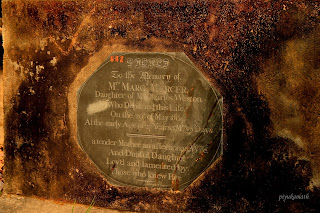 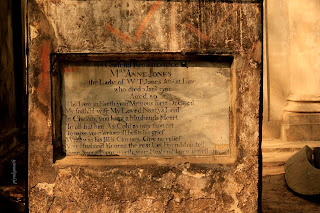 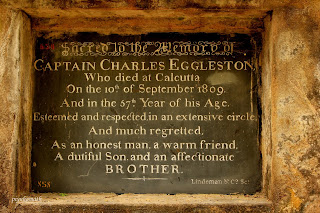 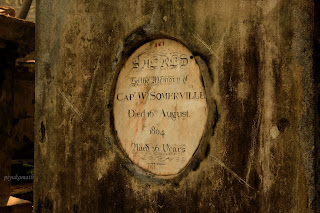 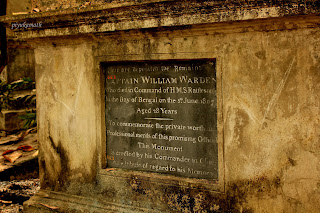 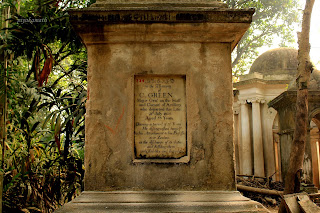 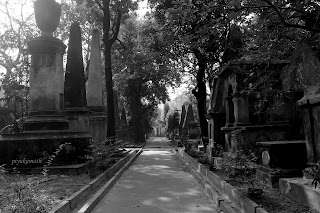 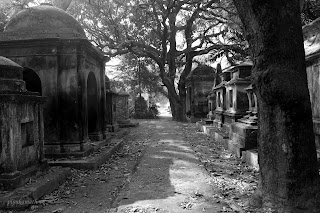 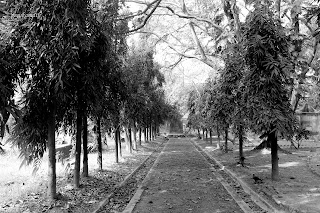 By now, all nervousness had disappeared, and I was actually venturing off the path, in between the tombs. Small prayers were regularly said for the departed souls. A sudden shrill cry and a clap brought me out of the reverie. A small boy aged no more than ten who turned out to be one of the maintenance staffs' son, was saying something in Bengali, all the time pointing in the direction beyond and shaking his head. I took it as a sign to turn back.

I got talking with the care-taker of the place, who turned out to be a Goan, but spoke no Konkani. He was born and brought up in Kolkata itself, he said. He spoke of the day-to-day activities, of the difficulties and challenges involved in the maintenance of the place, etc. I casually asked him if there were any instances of any paranormal experiences reported, to which he replied with just a twinkling smile. Probably he got that particular question too often, because his smile looked quite practiced. And wasn't I glad! Glad that I hadn't asked him the question before entering the place.

And yeah, I did not feel any paranormal activity around. A visit is definitely recommended, specially for those interested in Colonial history.

(You can read more about this place here)