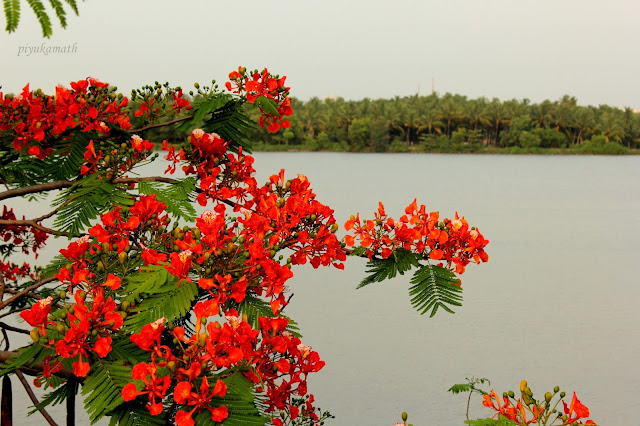 This picture was taken by the Gurupur river (a.k.a River Phalguni) last May, which in earlier times was considered to be the Northern boundary of Mangalore. The Kulur bridge over the river used to be a favorite spot as a kid, which we'd cross en-route the beach.

The particular evening on which I clicked this picture, the river appeared unusually calm. It had just drizzled sometime earlier, followed by bright sunshine, which meant there was a glorious rainbow on the distant horizon. It offered the perfect setting to try and experiment with the camera, which I'd just bought that day. My favorite bit about this picture is the contrast the bright red flowers make against the sober background, plus the neat fence-like boundary the coconut trees on the river-bank on the other side seem to make.
Flowers Gurupur river Kulur Mangalore Rivers of India