on Saturday, November 14, 2015
The photograph was taken while driving through South Goa. It was the eve of Independence Day, and I spotted these girls by the highway, chatting away, lost in a world of their own. The sight immediately brought back a flood of memories from both middle and high school, how I used to walk home every day from school discussing myriad topics with my friend. 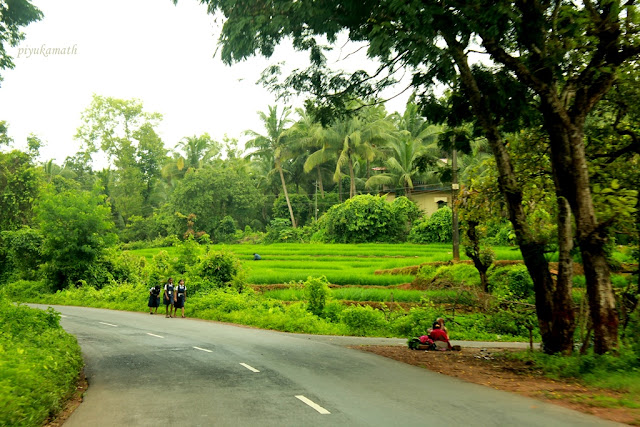 Ours was a Convent school more than a century old, which I can proudly say is one of the oldest in my city. Located near the mouth of the Gurupur river, the campus is quite spread out, and the view is beautiful. There was a Pakistan Ground, a Honeymoon tree and a fable of a secret tunnel leading all the way to Bekal Fort built by Tipu Sultan! The day would begin with the morning assembly and prayer, morning news and an address by the Headmistress. We'd then sing either the National Anthem or the State song or the School song to mark the end of proceedings, and the day would begin.

The most awaited part of the day would obviously be the breaks and Lunch Hour. Sharing food, and almost always finding the contents of your friends' snack-boxes much more tastier than yours was usual. The crazy gossip sessions! Being an all girls school, one can only imagine the amount of 'news' that flew around. Some of it would definitely be light years away from the truth, but then that only added to the spice. Looking back now, it's so funny, and even embarrassing. Many-a-times it would begin with something like, 'hey did you hear? Yesterday it seems she was seen with a ....blah blah blah'.

And then the fan clubs! There would be at-least one girl who'd HATE Gauri Khan for being SRK's wife. Kuch Kuch Hota Hai and the friendship bands created quite a stir, resulting in a 'ban' of friendship bands in the campus. Hrithik Roshan debuted during the time, and made many a hearts flutter. There would be girls who'd fight tooth and nail as to who was a better player (read good-looking), Ajay Jadeja or Rahul Dravid, Daniel Vettori or Brett Lee, or even Shoiab Akhtar  (No one gave a damn to Sachin Tendulkar). And why film-stars or cricketers, there would be secret fan clubs of senior girls too! For some reason they'd appear way cooler than we were. And I vividly remember how one day our class teacher sat us all down, and gave us a strict, no-nonsense talk on how stupid all these fan-clubs were.

How can I forget the Harry Potter clubs? That was the time when the books were still being written, and we'd have to painstakingly wait for the next book to be released. We waited for three whole years for the fifth book to be released, only to find out that Sirius died. Plus the first movie was released during the same time and was released in India six months after it's world-wide release. We'd tracked down a VCD rental place which had managed to get a pirated copy even before the official world-wide release, and I remember paying double just to watch it early. And finally all we'd say is 'the movies are simply not as good as the books'. We would read the Malory Towers and St. Clare's series by Enid Blyton, and name each one of us after some character - the least liked girl would be named Gwendolyn! And when we became 'seniors', we were sent to 'mind' junior classes.

Celebrating Christmas at school was something we waited for the entire year. We would work hard to make sure ours' was the most beautiful crib and the best decorated tree in the entire school. And no matter what background we came from, we'd visit the Chapel on the morning of every single exam, to make sure the Gods smiled when we wrote those exams. The last day of exams was looked forward to, as we would secretly hide 'forbidden' stuff in our bags, wear nail polish on our toes (which wasn't allowed otherwise), and loiter about in the campus for a long time, till we were shooed away.

And our strict yet wonderful and motherly teachers. They were the angels who stood behind us, to support us every time we tripped, and helped shape our future. The subjects apart, general lessons for life that they gave have helped so much in those formative years!

Whew! These are just some of the best parts of school, and I'm sure every one who reads this post can relate to it in some way or the other. Writing this has left me quite nostalgic, and brought back some long forgotten memories too.

For, those were the best days of my life!

Did I miss anything? Add what you think was the best part of your school experience!
Convent School Countryside Drive Mangalore Reflections School