Book Review: AJAYA : Epic of the Kaurava Clan - Roll Of The Dice & Rise of Kali, by Anand Neelakantan 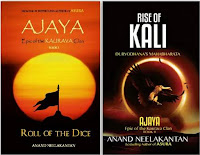 After the much acclaimed ASURA, Anand Neelakantan has written this two-book series on the other great epic- The Mahabharat, and consists of two books. As a reader of Asura would’ve expected, the Mahabharata is now narrated from the Kauravas' point of view. This probably is in tune with what the author describes about himself, that he always felt drawn towards the anti-heroes, the vanquished, the downtrodden, and he attempts to tell their story via his books.

Jaya is the song of victory that Sage Vyas wrote, desrcibing the victory of the Pandavas over the Kauravas in the battle of Kurulshetra. But whose victory was it anyway?
This is Ajaya, the song of those who lost!

Two books make up the AJAYA series. Book 1 is Roll of the Dice, and book 2 is Rise of Kali. It would be prudent to review the series as a whole, rather than the individual books, as one is just the continuation of the other.

The prefix Dur refers to anything inauspicious or simply put, something bad. Therefore traditional versions of the Mahabharat have all referred to the Kauravas with this prefix. So we have always read about Duryodhana, Dushala or Dushasana; they are referred to as Suyodhana, Sushala, Sushasana instead in Ajaya. And as expected, the Pandavas are the anti-heroes. They are snobbish, always favored, and many-a-times, hypocritical. Rules are bent for them on countless occasions. The first book stops at Draupadi’s vastraharan (disrobing), from where the second book begins.

Eklavya plays an important role and is shown in a different, more human, light. Any normal human being if asked to give up his/her best asset based only on the caste would bear some resentment toward the person who asked for it, and this is depicted in Eklavya. There is a recurring fictional character called Jara, again an untouchable, who roams the streets with his blind dog.

The second book is more philosophical than the first. The dialogue between Krishna and his elder brother Balarama is worth mentioning. As also are the last few chapters of the second book, the Pandavas' realisation, Ashwathama's rantings, etc. And no, the Pandavas aren't depicted as the absolute villians. They are just people who have been manipulated by various people in the name of Dharma. Also, people like Shakuni are still vile.

The style of writing is exactly the same as his earlier book. A lot of similarities can be drawn between Bhadra from Asura and Jara. The descriptions of various incidents is cruelly comical. Over all, these books are far more engaging than Asura (or probably that’s because I’ve always liked reading Mahabharata more than the Ramayan). Attention to detail is amazing- even the dog that follows Yudhishtira on his final journey has a story! Also, the book highlights the issues of caste, lack of respect to women, etc. prevalent in those times.

Again, the puritan will definitely NOT like this book, as even Lord Krishna has been depicted as being a ‘God’ or having any godly qualities with a lot of underlined cynicism. His vishwaroopam is referred to as merely a magic trick! There is sometimes a lot of sarcasm infused whenever someone speaks of Him as a perpetrator of Dharma. He also has been shown as being a scheming and shrewd person, (mis)guiding the Pandavas all the time, all in the name of upholding Dharma and Varna. I’m pretty sure a lot of hate mails and criticisms would have been directed towards Neelakantan.

Personally, this was how I had understood the Mahabharat right from the beginning. I simply couldn't justify or rather rationalise the unscrupulous acts of the Pandavas, be it killing the opponents of war by deceit, or gambling away their wife, all under the banner of Dharma. As a line in the book goes, first fighting a deceitful war, and then glorifying it simply isn't Dharma!

TIP: Read the books with a very open mind. All previous ideas of the epic will have to be uprooted from one’s mind before beginning this series. Else it will be quite difficult if not impossible to read it through.

*Repititive: I’d written this point about Asura as well. Probably Devdutt Pattnaik’s books have less of this negative aspect.
*Blasphemous? Maybe too strong a word to use, but deeply religious people will not like it.

FINAL THOUGHTS:
I’d recommend reading Ajaya only for those who have already read the traditional version of Mahabharat, the Jaya. Only then can one draw effective comparisons, question certain acts and incidents, and draw plausible conclusions from Ajaya.

Well worth a read.