Not Forever Does the Bulbul Sing. 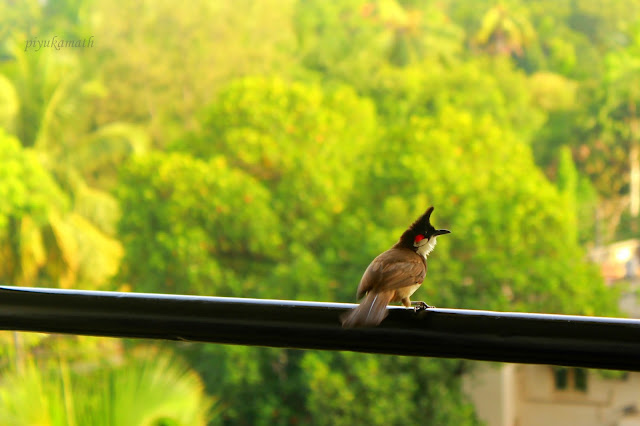 This week's picture is of a little Bulbul, who decided to build her home in a corner of my balcony, in the Summer gone by. Those were the post-MD exam holidays, and I was at home waiting for the results to be announced, like a sword hanging on my neck. One evening we heard some soft chirping from the balcony, and went out to see who it was. There she was, sitting on the clothes line; she flew away quickly after, but not before dirtying freshly done laundry. Her visits became a regular affair, and soon there were two of them. Which is when we realized they were planning to stay.


The nest-building then started, and for the first few days, that part of the balcony would be strewn with twigs and dry leaves. I have a nest of the weaver bird that I picked up from my village, hanging at one corner of the balcony, and these two decided to build their nest right above that. Watching them put together a compact nest over the next few days was a wonderful experience. Finally it was done, but very precariously set.

Once the nest was built, their routine was established. They'd wake up quite early, and their chirps would wake us up. Both would fly out, but she would return quite early. He would periodically drop in, as if to check on her. As dusk approached, he would return back. She would sleep comfortably inside the nest, and he would spend the entire night perched on the clothes line next to the nest, leaving us marvelling at his balance.

After a while they got used to our presence, and didn't seem to mind us much. They ignored us largely, but if we got a little too close, she would go tut-tut-tut, something like a warning not to come closer. Also, they stopped dirtying the place. However, never once did they touch the water/grains/biscuits/dry fruits that I put out for them each day! From our side, we did our bit by leaving the clothes line vacant at that corner.

One morning when both had gone out, we felt a little movement in the nest, and to our pleasant surprise realized that it was the head of the little one bobbing up and down. We could never figure out when he had been born! Soon, the little one started making noises, and I'd wait to see Mummy bulbul feeding her baby everyday. The chirps started getting louder.

One day to my shock, I saw the little one had managed to fly out from the nest, and was perched on the ledge of the balcony. And he didn't know how to get back. The parents soon returned, and tried to get him back, but to no avail. One of them then flew out, and suddenly like an idiot, the baby too followed. The other parent, sat for sometime on the railing, which is when this picture was clicked, and followed them both. And they never returned. I'd like to hope the baby lived to grow up into a fine bird, but I have a nasty feeling he was eaten up by a cat (I saw/?imagined the baby falling down soon after he flew out). He simply wasn't strong enough to make it through when he stupidly flew away!

Now, from the past one week, we have another bulbul that's been coming everyday, and has also built a different nest over the earlier one. My optimist mind says that it's the same one that was born in my balcony, now back to start his own family!

Here is a collage of a few other pictures of the family and the baby. 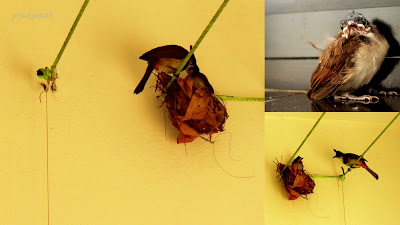 [The title of the article is borrowed from Khushwant Singh's book, Train to Pakistan. I have referred to the birds as he/she throughout the post, frankly I have no idea which one was male or female, it just felt better than addressing it as ít'! ]
Bulbul Home Mangalore Summer