on Thursday, February 04, 2016
Our Bhootha Kola- A memorable evening!

In my previous post, I’d put up a photograph describing a local tradition of SPIRIT WORSHIP prevalent in these parts along the coast (referred to as Tulunadu encompassing Udupi & Dakshina Kannada districts of Karnataka and Kasargod district of Kerala, where the local language is essentially Tulu). Well, we had a similar event over the weekend; by good grace everything went on exactly (and even better) than planned, and I simply couldn't resist putting this up here. We received help from unexpected quarters- both financial and otherwise (which actually mattered more at that point of time!).

Sharing one picture shot towards the end of the event, with all three Oracles in one frame (the spirits are temporarily believed to occupy a person who acts as the medium, and speak out through them). Starting with this post, this will be an eleven-part series with write-ups and pictures on the event, right from the preparations to the D-day, to the closure. 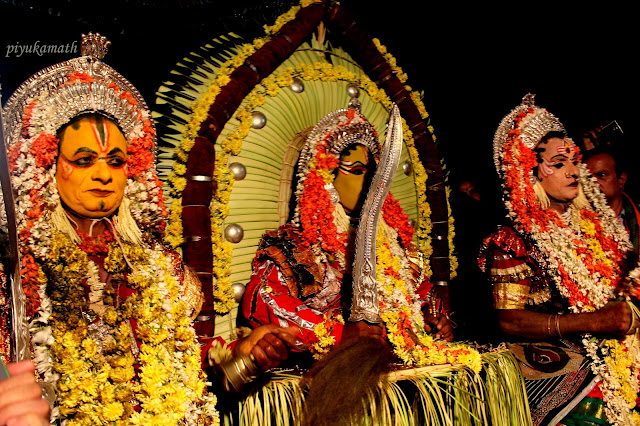 The spirits here include Panjurli (of the land on which stands our ancestral home), and Panjurli & Varthe, of our clan.

As I mentioned earlier, the entire responsibility of organising the event rested on Dad. He received tremendous help, which cannot be measured in anyway and which will never be forgotten, from about five people. They ran around for so many different things- right from little things like a mat for the artists to sit on, to a pair of scissors to snip flower garlands. And it so rightly is said, all’s well that ends well! The event went on all night, ending at about 4 AM. Everyone had words of appreciation for the arrangements. People personally came and congratulated us for the grand success. All the hard work paid off, as no stone was left unturned in our effort in organising the kola.

Now this is my take on the subject- when people came and settled down here in earlier times from different regions, they adopted the local culture as well, and this is probably how different castes and communities worship a common deity.

As a preface to the series, let me recite an incident that took place more than six decades ago. With small houses and large families, people then commonly slept in the outer verandas of their houses. Amongst others, there were two brothers sleeping, the younger one being just three years old. The house was surrounded by paddy fields with standing water. In those times, electricity had not yet made its entry into our village, and walking into the fields meant lush paddy plants on both sides with a very narrow path in between. Walking even during the daytime on this path has to be done very carefully.

In the dead of the night, a neighbour hears a baby cry from the fields. So when this neighbour hears the cries, he sets out to investigate with a lantern, a stick and a helper boy. On reaching the very edge of the field, they spot a small child standing there all alone, crying, wet with perspiration. They bring the child back and realise it belongs to the house next door. By that time, the elder brother has woken up, has realised that the child is missing, and a frantic search is going on. This is when the neighbour reaches there with the child. When they realise that the child was out in the fields by himself, they are stunned; they can't believe the child has managed to walk on the narrow path without even falling down. Once the child has calmed down, people ask him where, and more importantly, how he went out into the fields all alone. He says he wasn't alone. He says there were two hens with him, one in the front leading the way, and one behind him. He says as he reached the edge, both hens merged into one, and then disappeared. And he started crying. Even on repeated questioning, the child repeats the same story. Now consider this, the child is too small to cook up stories, that too in the middle of the night. The child is none other than my uncle, and it is he himself who recited this to me...So then, what does one make of this incident? ...

Watch this space for more; part-two deals with preparations to the event.

(CLICK HERE to follow this link to another blog to read more on the story of Panjurli.)