on Monday, February 29, 2016
Disclaimer: From here on, the posts will include descriptions of Possession- the spirits occupying the man who acts as the medium (the Oracle), the spirits talking through the Oracle, etc. It is purely a matter of belief. Now whether one would believe it or not is left to them; personally for me it's more of a form of local art and culture than anything else. Which is why I put up such articles on my blog. These indigenous traditions, unless preserved, could slowly disappear, till we would only have to read about such practices in history books.

The poojari is a lean person with curly hair. Actually most of the artists are curly-haired, and I've always wondered why! Earlier in the evening, the clothes and some flowers that have to be worn for the ceremony have already been handed over to them. 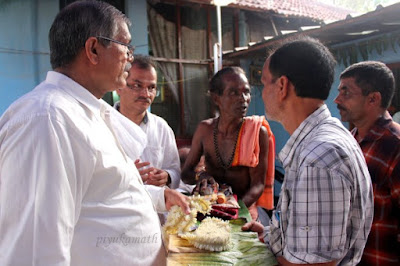 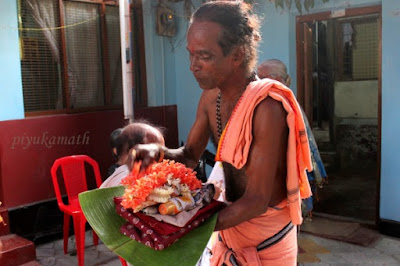 The first part involves a prayer with everyone gathered together. Another key person in the ceremony is the one who'll communicate with the possessed person. He generally is someone who can speak real pure fluent Tulu, and his talk is very nice to listen to (though I realise I can't understand half the stuff he's saying)! I'll refer to him as the Madyastha or the Mediator.
So, everyone gathers outside the newly renovated room dedicated to the house demi-god, Panjurli, a male spirit. A prayer is said, Panjurli's story is recited by the Madyastha, and some oil is handed over to the poojari, which he applies on his head and takes a bath. This is symbolic, and I still haven't been able to find out the reason for this practise. 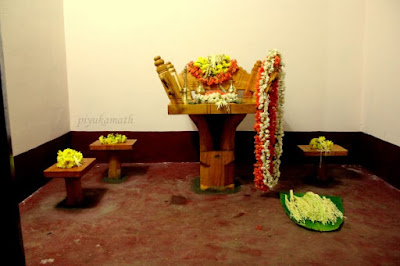 He comes back soon, and we notice the poojari subtly changing his demeanour. And then all of a sudden, he's in a trance. I'm told he's been possessed! He starts shaking continuously. Plus the music in the background is hypnotising. He communicates through actions with the Madyastha, who in turn tells those gathered around what the spirit wants to communicate. He asks questions where applicable, both to the Spirit as well as to the people. 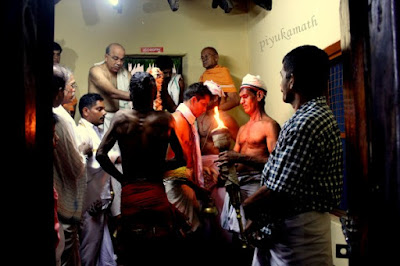 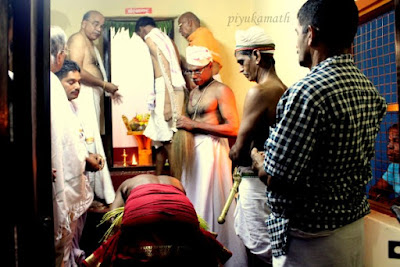 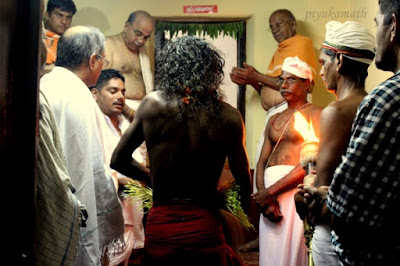 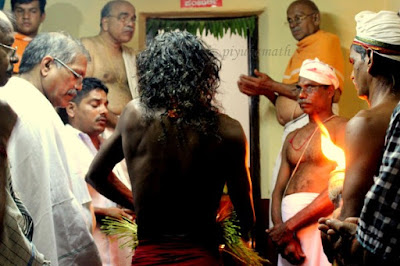 He rolls his eyes up a couple of times, and cries out loud in between (could be actually scary to someone watching it for the first time!). Everyone watches him without a word. Flowers are sprinkled on him by those gathered around. 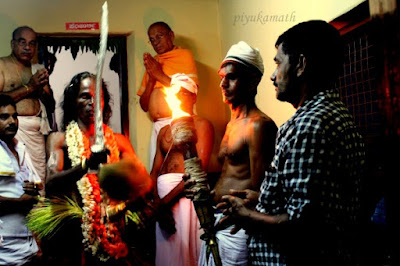 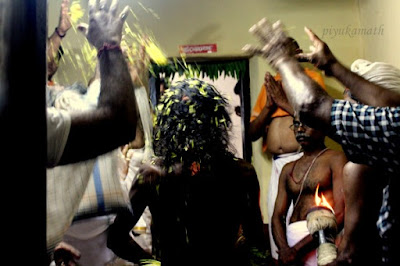 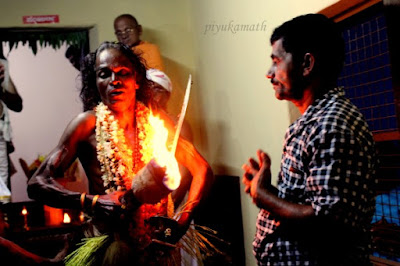 The same ritual repeats at the female spirit, Varthe's place of residence in the house. And then again, at the newly constructed Saana right next to our ancestral home.
(Saana = A room for the spirit of the area, similar to a temple, but is never referred to as temple. Instead it's called a 'gudi' or 'saana' or 'daivasthana') 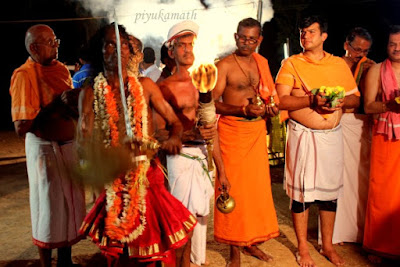 After this, follows, what is considered one of the key parts of the evening- 'Bhandaara' ceremony, a ritual where senior male members of the family carry various articles, including flowers, coconuts, the silver headgear that will be used in the ceremony, etc. in a close file one behind the other, to the mantap, accompanied by music. All of them have to wear a mundu and cover their head with a mundas (something like a short version of a turban, tied with a long cloth or towel). Before I realise, they step out of the house and I jump out of the way; things happen so fast, I fail to get a decent picture. The short procession reaches the mantap, and everything is placed in order. The poojari whose body is now shining with perspiration, is slowly de-possessed (couldn't find a better word!). 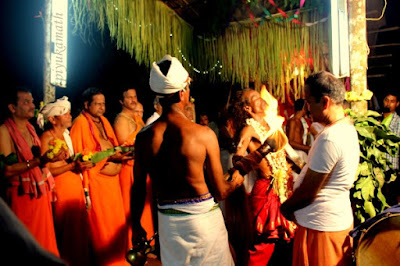 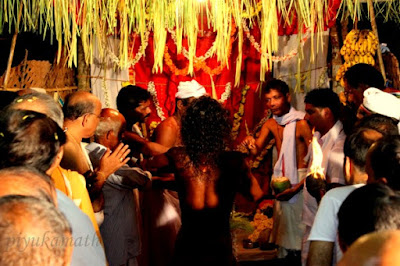 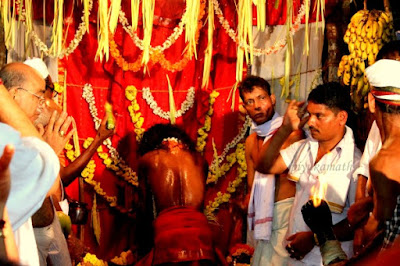 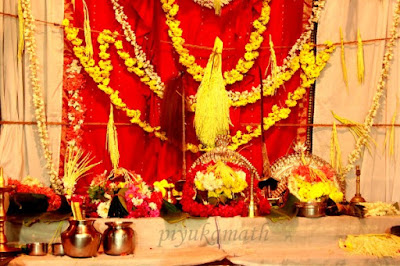 One thing worth mentioning is the importance of good musicians or the Vaadya. The beats have to be apt as the situation demands. The flat drum is a special one (taashe) which generates powerful sound. It's not uncommon to hear people commenting that if the beats are powerful, anyone in the crowd will end up being possessed and dance the night away! Luckily, the vaadya team booked for the evening is very good and energetic. I find a place right next to the team; even the next day, the sounds are reverberating in my ears! 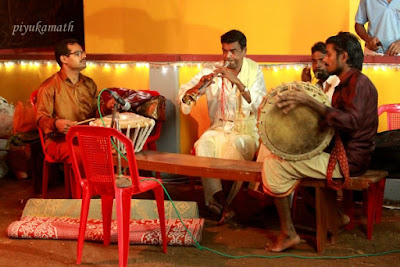 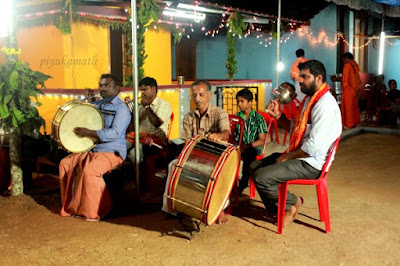 This is the formal inauguration of the evening rituals, and the inauguration has been auspicious. It's now time for dinner. A different variety of dosa made for the evening is handed over to the artists. Again, this is symbolic. By now a lot of people including relatives, friends, and village folk have gathered at the venue. We have not anticipated so many to be present, and seeing everyone gathered, we just hope everything goes on well! People have dinner, and await the next part of the Kola. 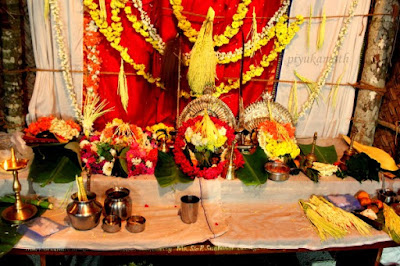