on Monday, March 14, 2016
Invoking Panjurli
(Click on pictures to enlarge)

Disclaimer: This post includes descriptions of Possession, wherein the Spirit occupies the man acting as the medium (The Oracle) temporarily. It is left to an individual to believe this or to differ with the idea. For me personally, it's more a form of local art than anything else. This is why I put up such articles and photographs on my blog. These indigenous traditions, unless preserved, could slowly disappear, till we'd end up only reading about such customs and practices. I claim no authority on the subject; whatever I've put up here is what I've been told by my folks, or what I've read on the topic. 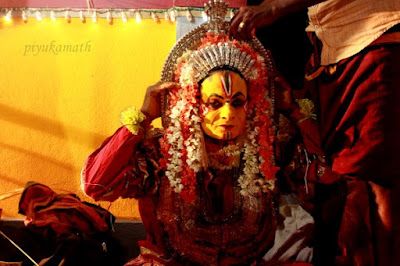 As soon as he is ready, he approaches the mantap. The musicians begin a note which is typical for the first dance. The beats are perfect too, and so is the rhythm. The dance (nalike) begins. The steps are in sync with the beats, and each complements the other. He quickens his steps, and the beats pick up. The tune stays constant, and quickens or slows down according to the beats. He has been possessed! 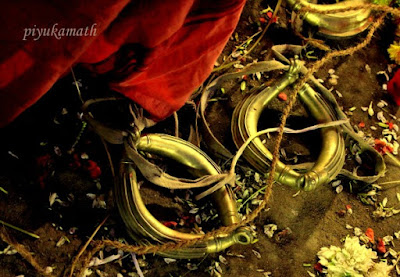 His expressions are vivid. Throughout the initial part, he dances holding a pair of heavy traditional brass anklets (gaggara). As he dances around the arena, he stops in front of senior male members of the family, and the crowd in general. They respond with a respectful gesture of a namaskaar or something similar. 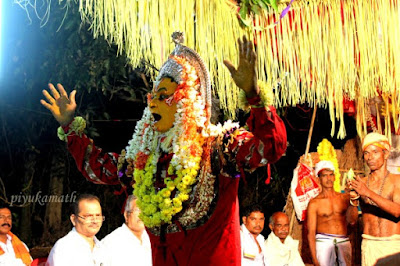 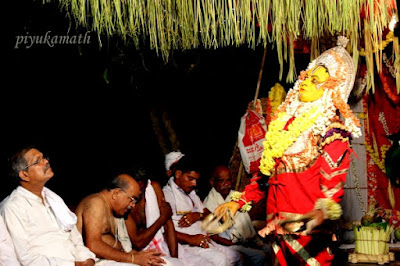 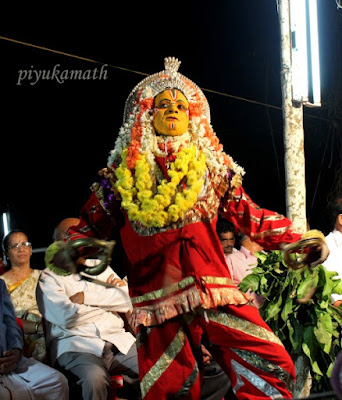 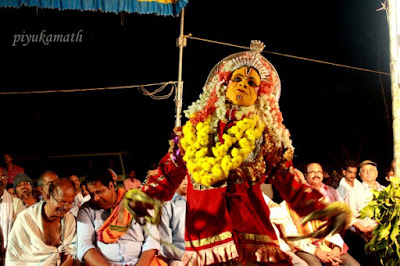 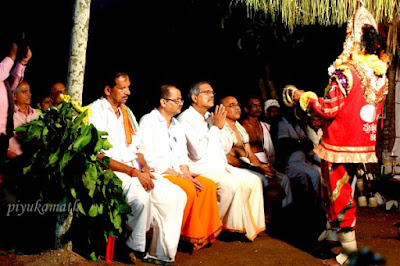 After a long round of dance, he stops. It is now time to tie the anklets, which make a wonderful sound of a very rich quality. Next, a long piece made of tender coconut fronds (siri) is tied like a sarong around the waist. 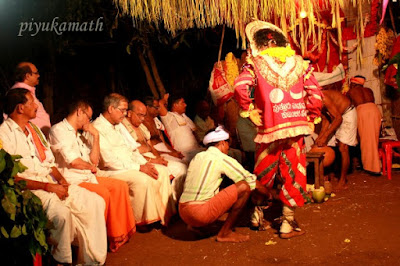 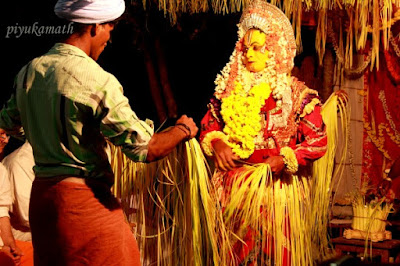 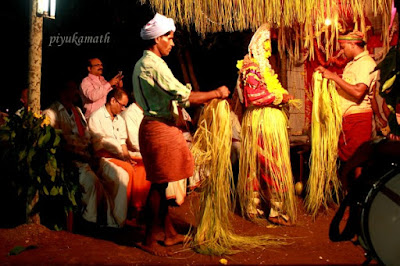 Watching the dance after the siri is tied is a sight to behold. The swish and swash of the fronds looks very graceful. This particular artist is a veteran in the field, and everyone enjoys watching him dance.
(The pictures are not very clear here, as the steps were too fast, and I didn't use flash) 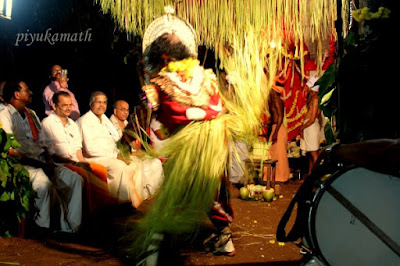 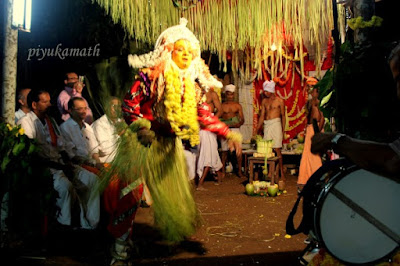 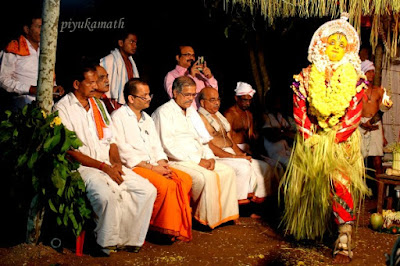 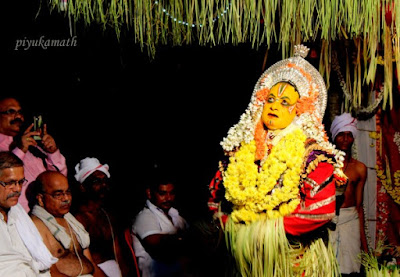 Next he dances with a lit torch (jeetige). This is again made of brass. A cloth is tied at the top edge and lit, with oil being poured on it continuously. He keeps the torch close to his chest, every time he stops near the crowd of people watching him. 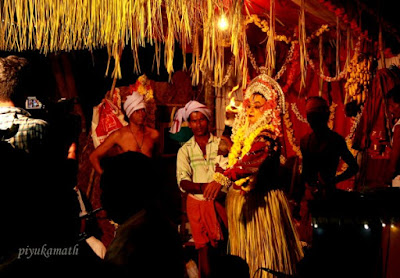 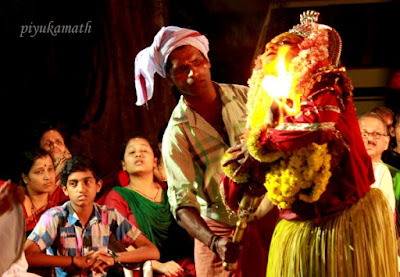 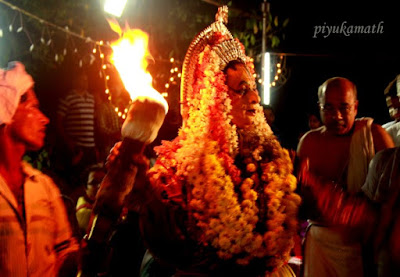 He goes to the newly constructed 'gudi' (like a temple), which will be where the Spirit will henceforth reside, keeping his watchful eye over his land. His expressions convey he is satisfied, and in-fact, very happy. He then goes to the tulsi plant in the courtyard and prays. 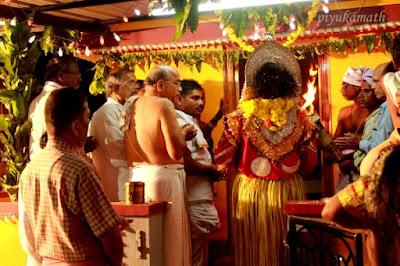 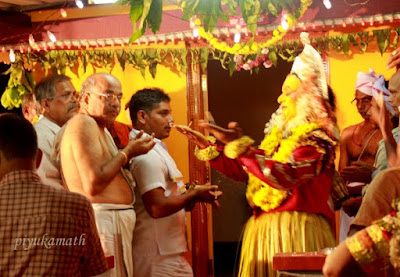 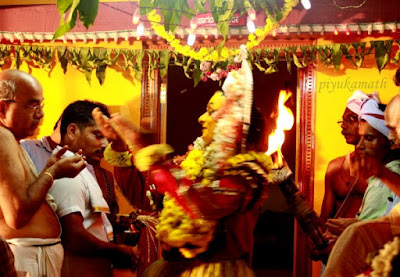 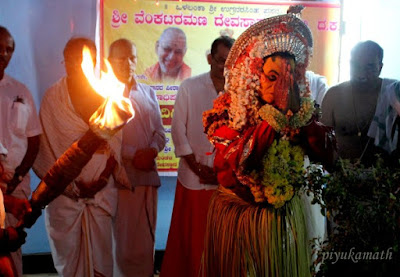 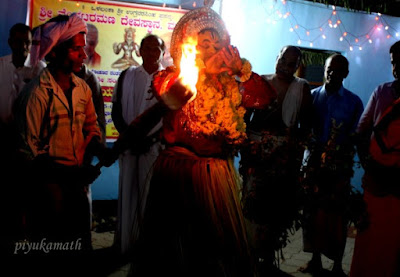 Finally he goes back to the mantap, and gets everyone in the family to join hands together, which conveys his message to everyone in the family, to be united in spirit (pun intended). He then slowly sinks to the ground, which is a signal of de-possession, i.e the Spirit leaving his body. He drinks tender coconut water which is again symbolic of acceptance. 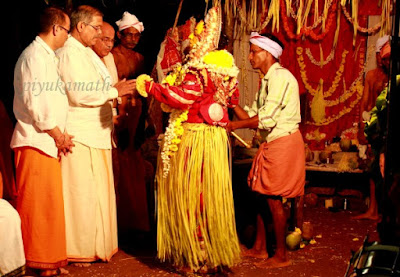 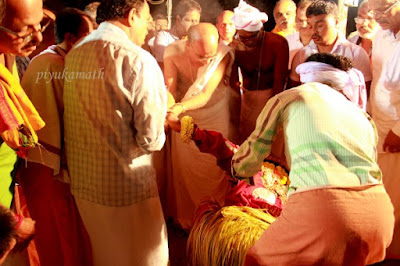 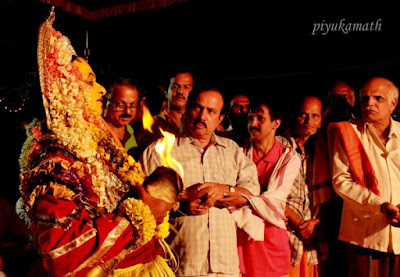 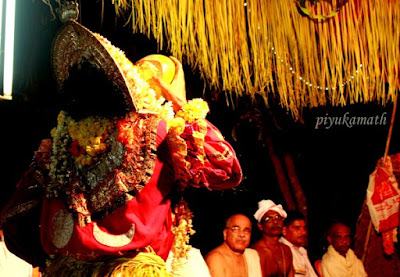 It is past midnight now. This marks the end of round one, and it is time for the next pair of Spirits (Panjurli and Varthe), to be invoked.