After much confusion & deliberation, I've decided to first outline our short trip, followed by individual details of these temples. 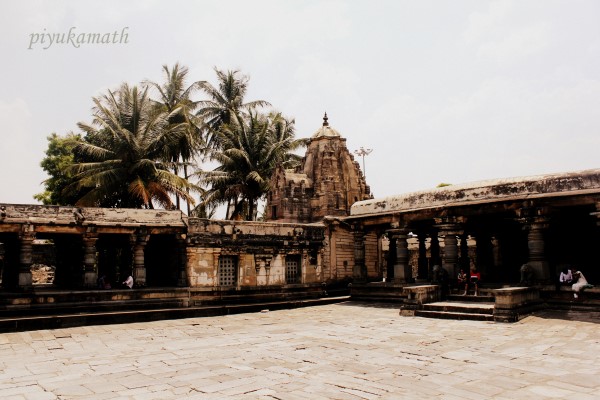 Our first stop is Chennakeshava Temple, Belur. The drive to Belur takes us through vast farmland. On the way, we also spot a few wind-mills. The road is excellent, and makes for a smooth drive, but the driving culture is scary. We rename the State-owned buses as KK - Killer KSRTC! At times, we are literally bullied by a few buses on the way- unreasonable overtaking, abrupt braking, etc. We also see a lot of tractors, bullock carts, etc., something not very common in Mangalore. 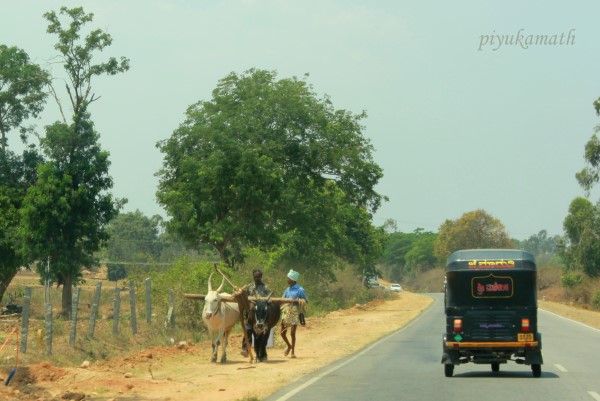 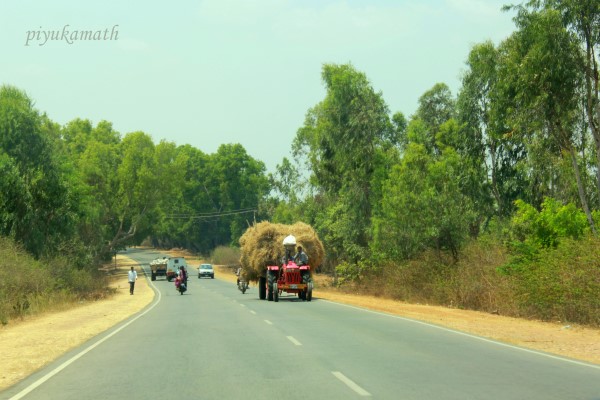 We reach Belur at about 1 PM, a very wrong time of the day to be out in the open, and to shoot pictures. But the plus point is there aren't many tourists. For a change, I've had the foresight to carry pairs of socks. The major paths around the temple have been carpeted, but there also are large un-carpeted areas which are impossible to tread on barefooted, at mid-day. 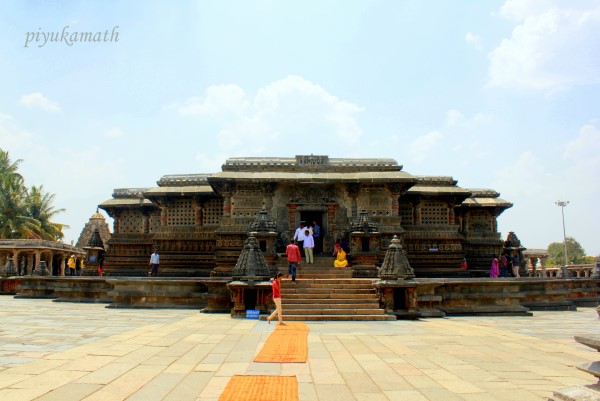 The first glimpse of the temple leaves us marvelled. People of that era must have been super-human. Else how could they possibly carve such figures and figurines out of stone, and produce such beautiful structures! The outer walls are entirely covered with intricate stone carvings- of both human beings and animals. There are scenes from the Puranas, and scenes of war alike. 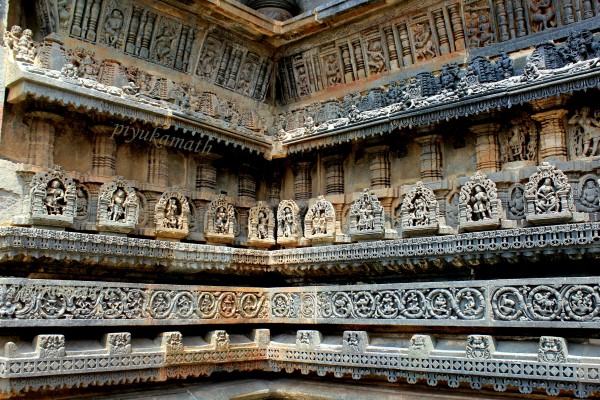 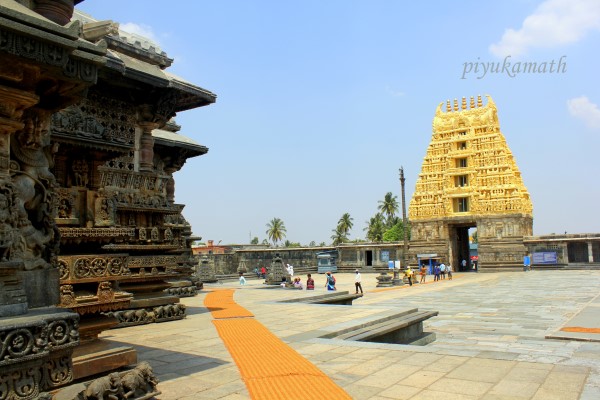 We enter the temple, and are in for a surprise. It is unexpectedly very cool inside. And the stone work is beautiful. Even the ceiling is carved. Another striking feature is the presence of huge stone pillars. I dare say no two pillars are exactly alike. The central hanging pillar with a carving of Narasimha, leaves us speechless. We gaze at the ceiling for a very long time. There are tiny hole-like 'windows' in the walls, producing something like natural air-conditioning perhaps. 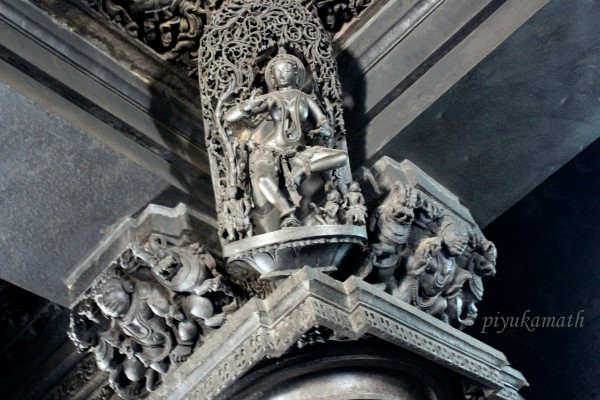 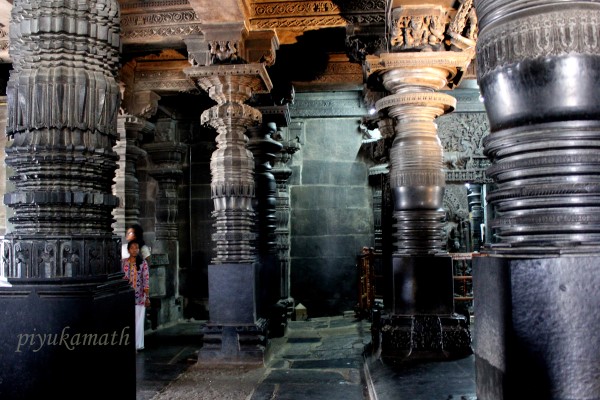 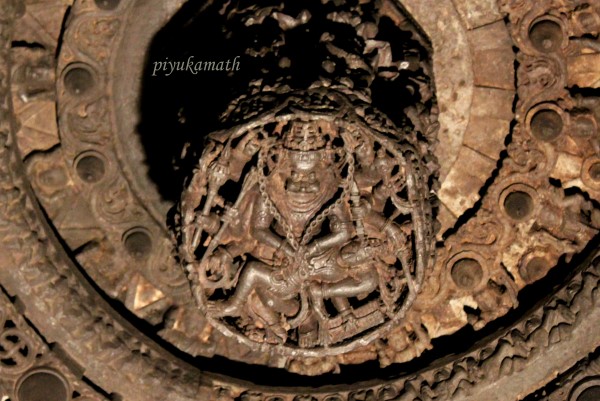 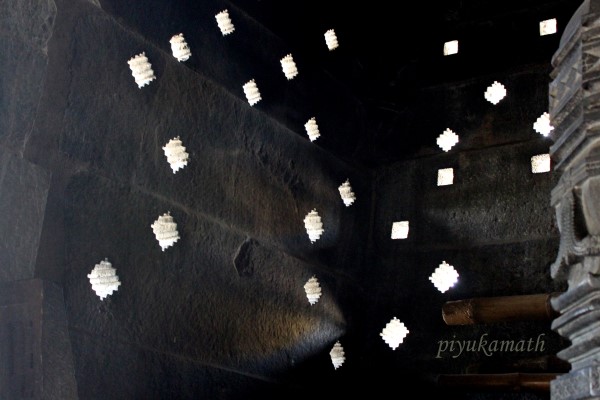 In-spite of my worsening cold, which has shown absolutely no response to cetirizine, we go about studying the architecture in detail, and don't realise the time go by. And we still can't believe we've never come here all these years, despite staying only about 170 km away! 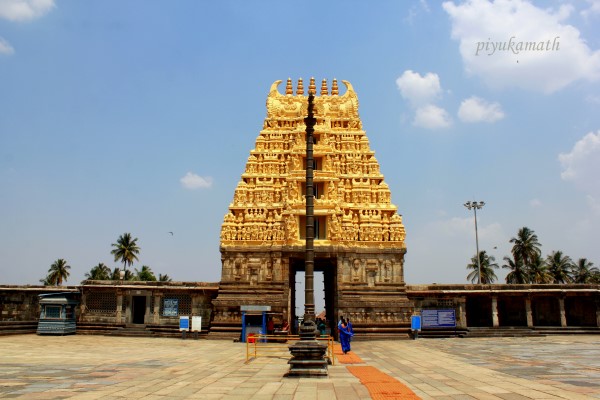