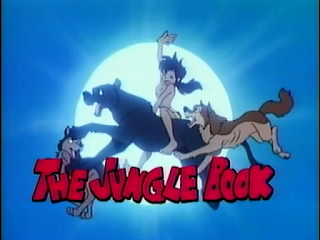 I watched The Jungle Book this week. Why is this movie special? Because the TV series on The Jungle Book was one of the things that made growing up special. I still remember how every Sunday we'd religiously sit in front of the TV (wearing the same attire as Mowgli), and sing along Jungle Jungle baat chali hai pata chala hai? Arey chaddi pahan ke phool khila hai khila hai!
(Sadly, this song never appeared in the movie. And it was the very reason I went for the Hindi version! Looks like it was made just for promotional reasons, to get all of us to go to watch the movie!)

So watching this movie was pure nostalgia, when those memories came rushing back. I felt the same chill in the spine when Shere Khan came on screen, as I felt back then. And it was amusing to note the fact that the theatre was filled with more adults than kids.

Coming to the movie, my views might be a little biased. I watched the Hindi version, and I was not disappointed. The characters literally come alive. Baloo, Bageera, Akela, the mother wolf, Kaa- all of them. Watching it in 3D is enthralling, and you could get lost amidst the jungle. Certain scenes are scary all right, and small children might even cry. Nana Patekar as Shere Khan is very very scary, Irrfan as Baloo is cute, Om Puri as Bageera is fatherly, and Priyanka Chopra as Kaa is mysterious. Neel Sethi as Mowgli is very good, the acting is very appreciable.

The plot is simple. Shere Khan wants the human-cub (pilla as he calls him) that the wolves have looked after. So Bageera takes up the responsibility of finally taking Mowgli to his tribe- the settlement of the humans at the edge of the forest. But does Mowgli want to go? For him, the Jungle has always been his home, and the Law of the Jungle has been his anthem. The animals are also scared of Fire, what they call the 'Rakt-Phool', which is a human creation. Shere Khan warns the animals of the possibility of Mowgli using fire when he comes of age. So what happens finally? Does Mowgli go back?