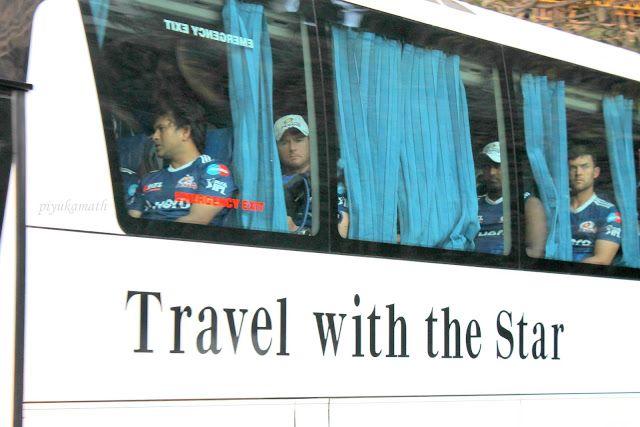 With the IPL season 9 starting today, here's a throwback picture. This was during IPL 2012, taken outside the Oberoi Trident, Mumbai, just as the Mumbai Indians were leaving for practice. My cousin and I were aimlessly lurking around the place, when we saw many people just hanging around. Plus there was a fervent excited buzz in the air. We asked and were told that, abhi Tendulkar aayega!

We were curious; my cousin is a big Tendulkar fan, whereas I never was one.  We too joined the crowd. And then suddenly the Team bus emerged, and we clicked madly, without bothering to see who was by the window in the bus. It was later when we zoomed-in into our camera screens that we realised, who we had shot! And no one believed us when we called home, until we showed them the picture. Didn't we feel like accomplished paparazzi that day! The crazy running behind the team bus had been worth!