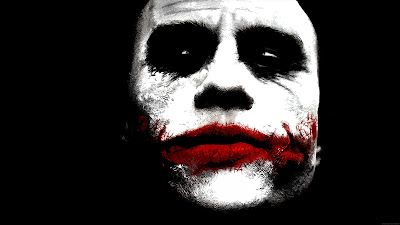 It's almost like I've been waiting to write this piece. So, who's that one movie character who has inspired me or managed to leave a mark? I'm not a huge movie buff. However, there are a few characters that have left a lasting imprint. And amongst all characters, the one that stands out is the Joker, played by Heath Ledger. Yes, he's a comic book character (and not strictly a movie character per se) played by an actor, but how! He exudes evil, pure unadulterated evil. Each time I watch him on screen, I get goosebumps.


And why would a negative character influence me so much? Well, if one were to cut the negativity out, and concentrate only on his dialogues, would it not make so much more sense in the present day, than probably even Batman himself? Most thoughts are so pragmatic. Many of these seem to strike the right chord, more than what the ever-right superhero would say. Here are some of his thoughts  that I love the most.

The Joker's nine pearls of wisdom


* Smile, because it confuses people. Smile, because it's easier than explaining what is killing you inside.
* Introduce a little anarchy. Upset the established order, and everything becomes chaos.
* If you’re good at something, never do it for free.
* Don't talk like one of them. You're not! Even if you'd like to be. To them, you're just a freak, like me! They need you right now, but when they don't, they'll cast you out, like a leper! You see, their morals, their code, it's a bad joke. Dropped at the first sign of trouble. They're only as good as the world allows them to be.
* I believe whatever doesn't kill you simply makes you… stranger. (Though I would modify it and say, stronger, instead of stranger)
* Madness, as you know, is like gravity. All it takes is a little…push.
*  I'm just ahead of the curve.
*  Do I really look like a guy with a plan? You know what I am? I'm a dog chasing cars. I wouldn't know what to do with one if I caught it! You know, I just, do things.
* Nobody panics when things go according to plan. Even if the plan is horrifying.

Read each one of these carefully. Does it not apply to each of us in some way or the other?
Isn't a little bit of anarchy required to get things going? Don't the marketing folks always recommend the third point? And if a person talks about his/her ideas, some of which may seem lofty, isn't he/she considered 'mad'? She may be just ahead of the curve!


Think about it. What are your thoughts on this? Do you think it's only the good guy who can be an influencer? Can one draw some inspiration from the bad guys too?

(The next Joker will be played by Jared Leto, in the Suicide Squad. He looks crazy and psychotic enough, but will he live up to the high standards set by Ledger?)