on Sunday, August 14, 2016
A Collection of Short Stories, Shilpi Chaklanobis 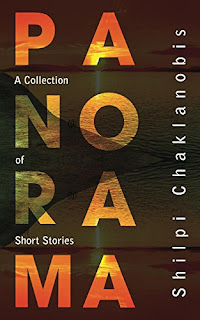 (You could pick up the book here)

Hello folks! I'm alive and kicking. Things have been keeping me busy for a while now, but I promise to write regularly very soon. Meanwhile, I've been reading a variety of books, mostly political and fiction. And in between a bit of one particular heavy reading (which I still haven't been able to complete- a book on the Emergency by Coomi Kapoor), I chanced upon this book, Panorama, A Collection of Short Stories, by Shilpi Chaklanobis. I decided to give it a try, and yea, I liked it.

Background:
This book is a collection of fifteen short stories. Each story is unique, and makes you think about a lot of things once you've finished it.
The book begins with what the value of money can mean to each person, and how a mother's love tries to deal with it, with a story on poverty. The plot is simple, yet profound. Next, there's a story based on love again, but this time it is love towards a pet animal. After all, the age old adage says a dog is a man's best friend. This is a heart tugging story about a little girl's love for her dog. Cut to the next story, this time a daughter's yearning for her mother's love. Not expensive gifts, not lavish parties, but plain, unadulterated mother's love. And in her quest to earn this, does she throw away her career? And what does she learn about her mother's murky affairs? And then, the next story deals with how even age old beliefs can be broken with a simple act of kindness. Is a person's caste even relevant in today's world?
It is now time for a story from a father's perspective. In bringing a child up, what is expected of the father? Is it enough if he provides financially? Is it not morally and ethically expected of him to provide emotionally too? Will his chauvinistic attitude let him do that? Next, the book moves on with a very touching story on how young girls get duped in India under the pretext of marriage. Haven't we heard of so many such instances wherein young girls are married and then deserted to fend for themselves, often with child? And then a story based on one of the worst national calamities in recent times- the Tsunami. We read about such disasters for a few days in the newspapers and then forget about it, but how do the survivors pick up their lives and start all over again?
A teacher teaches his/her whole life. What is it that touches a teacher's heart the most? Is it the student who scores cent percent and becomes an astronaut? Or could it be one or two students whose life the teacher managed to touch in some way or the other? This particular story touched me the most. Most of us have had very close friendships in our childhood. With changing times, would it be too idealistic to expect such friendships to remain the way they were? Even if people changed with time, would the crux of friendship remain the same? Or would the magic be lost somewhere?
Next, there's another story on the subtle nuances of a mother-daughter relationship. And how things are never what they seem to be. So what does the daughter do when she learns her mother's story? Do you believe in astrology? Well, if you don't, how would you react to something that happens when a face reader predicts it? Spooky co-incidence?
When a well-earning professional decides to quit being a corporat(e) and dedicate time to his family, how is his decision taken? Welcomed, or thwarted? And finally yet another touching story on what a daughter means to a mother, set in London.

My take:
I liked most of the stories. I did find the melancholy a bit overpowering sometimes, but then once in a while it's worth the time and effort  to read completely different genres from what one usually reads. The language is simple and neat. The variety of themes the stories are based blend well together, and are relevant for the times. I daresay each one who reads the book would connect with at least one story out of the fifteen. I would say this book is a perfect companion to carry on a long journey. Another suggestion would be to close the book and think for a while after each story, to assimilate the essence of each story.
Book Reviews Panorama Shilpi Chalaknobis Short stories