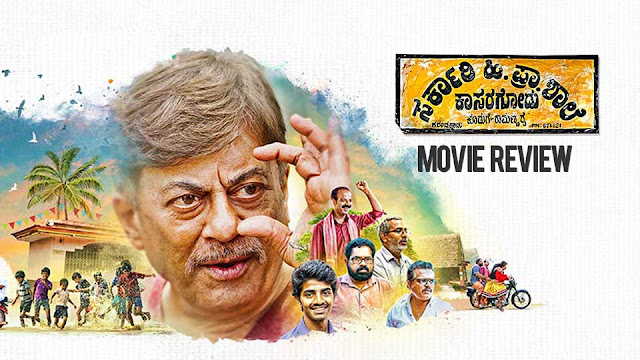 It's been a long-ish break, with the multiple festivals and celebrations. Ganesh Chaturthi was wonderful, about which I'll be writing later. This post was meant to be written about a month ago, soon after I watched the movie Sa.Hi.Pra.Shaale Kasargodu, Koduge Ramanna Rai.
Yes, that's the name of the movie, short isn't it?

Well, what got me interested was the trailer, the typical Kannada spoken around these parts of Karnataka. Referred to as 'bookish' Kannada, and often made fun of in the rest of the state, this version of Kannada is rarely used in movies. And if it is used, then it would mainly be to showcase a character from the coast, like how say a "South Indian" is distastefully pictured in low level Bollywood movies.

For those unfamiliar with the place, Kasargod is the northern most district of Kerala, and Kasargod town is just 50 km south of Mangalore city. This place is home to a sizeable population of Tuluvas and Kannadigas. When the states were formed, there was a demand to include Kasargod in Karnataka, but ultimately it was included in Kerala state. A wistful state of Tulunadu would include Kasargod, Dakshin Kannada and Udupi districts; the customs and culture of this entire belt is fairly common.

The theme of the movie is very simple. The plot revolves around the impending closure of a Kannada medium Government Higher Primary School, in a small village in Kasargod. When the students of this school realize that the adults of the village are not serious about opposing the closure of the school, they themselves set out to 'fight' for their school. They set off to Mysore, to bring a social worker to fight for their cause. Played by the legendary Anant Nag, there is no one else who would have done justice to this role. He is effortless and plays the role of Anantapadmanabha Bhat with elan. What ensues is a comedy of errors.

The role played by each person is appreciable. The level of research put in by the director Rishab Shetty is hard to describe in words- the attention to detail is mind-boggling. The best part of the movie is apart from Anant Nag, there are no stars in the movie. The children are all local, as the Kannada version of Kasargod cannot be spoken easily by a non-native. The way the characters are created is very relatable. There is no exaggerated effort to show communal harmony or any other religious or political overtones. This despite the movie carrying a very sensitive issue. The music by Vasuki Vaibhav is great too, each song is well composed and sung.

It's a clean comedy, perfect for a family to watch together.
Go watch it if you already haven't!

Here is the opening track describing Kasargod, I loved this video too.
There are some movies which somehow strike the right chord and touch you on a personal level. For me, this is one of them.
Kasargod Kerala Movie Review Reflections Tulunadu