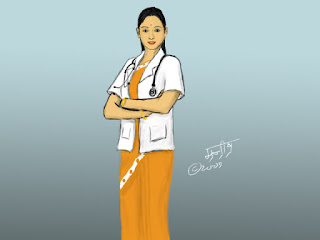 
“In the Indian society at large, a male doctor is a doctor, whereas a female doctor is first a woman, then a doctor. Basically, she has to fulfill ALL the other duties expected of a lady, in addition to that of a doctor. It is perfectly okay for a male doctor to work for 15 hours a day; he’ll be applauded for his dedication to the society. However, if a lady doctor does that, she’ll be condemned for being too ambitious and the lack of dedication to her family; defamed for not being a good mother, because of which her children will most definitely go astray!
How do you deal with it? Just be true to yourself, and yes, develop a very thick skin!”

Being an only much-loved child, the upbringing at home did not differentiate between genders. Infact I never knew such a thing existed thanks to the cosy bubble I lived in, till high school. I remember all the girls discussing what career to pursue, and one of the girls simply remarked, I’m going to get married because that’s what is expected of a “nice” girl. I was never able to find out what exactly a “nice girl” meant.
Fast forward to medical school, the very first incident that stands out for me was how patients almost always addressed a female medical student as ‘Sister’, and a male as ‘Doctor’. You could attribute this to their ignorance, or them trying to be respectful to the girl, but no. Even if they were told specifically, they would still continue the ‘sister’ chant. And these would be the same people who would want a ‘lady doctor’ to examine their wives!
The next incident that struck me was how it didn’t matter even if a girl was a doctor, was when one of my best friends from medical school who also had been the batch topper, had to get all dolled up and pose pretty for a set of tacky photographs to be taken at a studio, which would enter the chakravyuh of the Indian marriage market. And she even had to endure the custom of ‘ladki dekna’, just a week prior to the All India PG Entrance exams (there was no NEET then), despite her repeated requests. And yes, he said no, because she was too thin!
These few incidents made me realise that in the Indian society (not the workplace, I mean the family or the society at large), a male doctor is looked at as a doctor, whereas a female doctor is first a woman, then a doctor. Basically, she just has to fulfil ALL the other duties expected of a lady, in addition to that of being doctor. It is perfectly okay for the male doctor to work for 15 hours a day, he’ll be applauded and praised for his dedication to the society. However, if a lady doctor does that, she’ll be tarnished for her lack of dedication to her family. She’ll be defamed for not being a good mother, as a result of which her children will most definitely go astray! And yes, for being too ambitious as well!
Most of the times, the family will be supportive and will work out things between themselves, it is random unconcerned people who will have a problem. And yes, women can be their own worst enemies, true that. A friend (who also happened to be the PG gold medal holder) took a short break  to raise a family; the kind of comments she had to endure – it is a wonder as to how she kept her cool despite all the nosy questions from random people. Today she is a proud mother of two beautiful children apart from being a badass surgeon as well! I can list out many such incidents in my very own small circle of friends.
How does one deal with this kind of negativity? One cannot change peoples’ mind set, no matter how much one tries. Instead, the best way is to be true to yourself, and yes, develop a very thick skin!