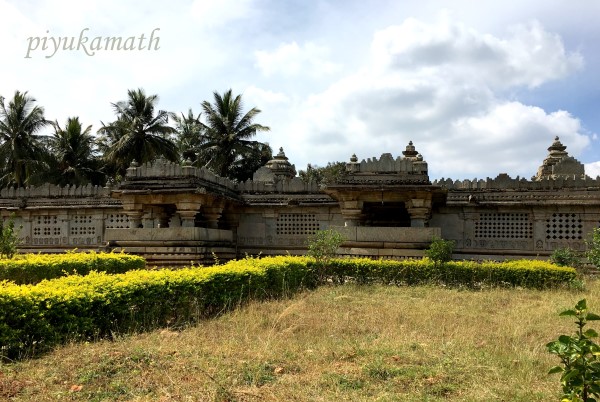 This 13th century marvel was not in our original list, and was a serendipitous find. Dejected at finding the Brahmeshwar Temple at Kikkeri locked, we were hovering around the area, with a very wild thought of climbing across the fence, while a local youth got talking and told us we could go here instead.

A long detour from the highway leading to Hassan, takes us through some vast farmlands, tiny villages, overgrown bushes, to finally find this temple, again near a small pond. We realise at this point that we are now in the neighbouring Mandya district, not quite knowing when exactly we crossed the district border. The first impression is that of wonder and relief. Wonder, because I did not expect such a beautiful temple lying in such a tiny lost village. Relief, well at having taken the boy's words seriously and not missing this temple.

See also:
On the Hoysala Trail 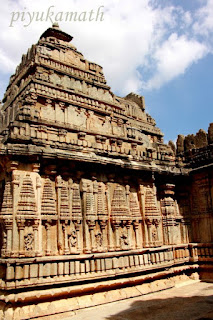 This village lies in area which was annexed by the Hoysalas from the Cholas, somewhere between the 12th-13th century. The temple is a good specimen of the Hoysala style of architecture.
With five Garbagrihas in North-South orientation, it has a quintuple plan. The Sukanasi and Navaranga lies in the same orientation. 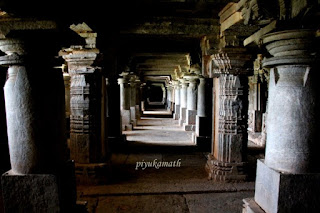 Inside the temple is a long hall way with beautiful pillars, and the locals say it might have been one of the inspirations for the famed pillared hallway of the Mysore palace. This is one of the very few temples that houses five Shiva Lingas, hence the name. These include the Sadyojatheshwara, Vamadeveshwara, Aghoreswara, Thuthurusheshwara, and Eeshaneshwara forms of Lord Shiva. Each of them is housed in a separate sanctum, side by side. Opposite each of the Lingas is a Nandi Bull, each having distinct carvings. 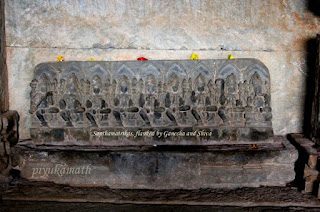 The walls are modestly decorated with sculptural representations of the epics. Some of the parts of the temple stand unfinished. Mallitama, one of the well known Hoysala sculptors is said to have contributed to this temple too. 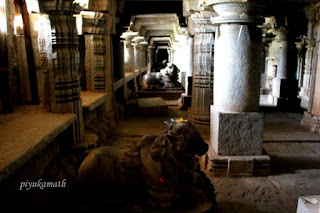 At the end of the time spent here, we are glad we found this place. The local guide is quite knowledgeable, and interesting to talk to. He says this place rarely gets visitors, as it's too out of the way from the more famous Hoysala temples.

We leave the place wondering. Wondering about how many more such temples are strewn across the district, the state, the country, and the subcontinent at large. How many of these lie in what states of disuse, abuse, or disrepair. A lifetime would be too less to visit each of these beautiful man-made creations.