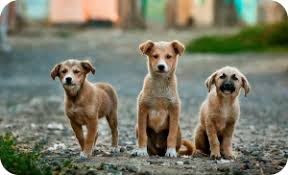 (Image source)
People may feel they're not earning enough or aren't rich enough to donate or feed strays. All I can say is you need a heart to donate, nothing else.
Animal Care Trust.
A name I heard every now and then, but never ever visited. Till the need to visit arose.
The Lockdown period saw us feeding the stray dogs in our area, including four female pups who mysteriously appeared one day. I still am sure they were left there by some hard-hearted people who did not want 'female' pups! (I hope there's a special place in hell for people who resort to such activities!).
Feeding our furry friends became a highlight of the day. So when one of the pups began to look sick, we were at a fix, and took her to the vet. The vet suggested taking her to ACT, and this is where our involvement with ACT began. One visit to this place, just one, left me with myriad emotions.
What happens at ACT?
At any given point of time, there's a flurry of activity. As you step inside, you're greeted by woofs from all around. Especially the healthy pups stand on their hind limbs in their respective enclosures to try  and see who the intruders into their territory are!
There are so many animals - dogs & pups, cats & kittens, injured birds, injured cattle - being treated or looked after. They conduct vaccination drives for street dogs. There's a ward dedicated to injured/maimed dogs. There's a separate area for blind dogs as well. There's an isolation ward for animals with infectious conditions. And there's a ward for nursing mothers too. There's an operation theater where sterilization procedures and other surgeries for street animals are conducted.
Apart from this, there are smaller enclosures where injured birds are housed after treatment till they recover, before releasing them back into the wild.
The shelter is aptly named Vatsalya (read more about it here).
Every now and then, there are heartless monsters who discard days-old kittens in gutters and dustbins. Whenever Team ACT is made aware of such situations, the team or the volunteers, bring the kittens to the facility, and try to make them bond with foster mothers (other lactating cats).
Can you imagine someone doing so much for these mute creatures? ACT is one among few other great souls in Mangalore city that tend to these community animals.
Adopt, DON'T Shop!
For those looking to add a four legged family member, this IS the place to go to. The pups are so so friendly, ever ready to play or get their heads patted - a lick or two is complimentary!
Of course, it's not for those who'd want to show off a fancy breed.
The trustee Mrs. Suma Nayak along with the Team at ACT consisting of very very dedicated people  at the facility, plus volunteers from across Mangalore city, look after each of the animals with so much love and handle things with elan. I felt ashamed that in the last 21 years of it's existence, I never had been there even once. Better late than never, perhaps?
The Lockdown has been hard on many of us, and on these fur babies too. Many of the community animals were fed by restaurants and street vendors, but all that has been affected. During this phase, Team ACT tried their best to ensure these animals got atleast one meal a day.
And that is where you can help too. Please.
You can Sponsor an animal on a monthly basis. You can volunteer with various activities. You can provide foster care too, if you have the resources.
DonateKart with ACT, has come up with this donation drive named "Support the Voiceless", where for every one item that you donate, they add an equal quantity of the same. So if you buy one pouch of Pedigree animal food through this drive, they add one pouch too, and ACT gets two. It could be just a 100 rupees you're spending- Every single contribution matters.
As I write this, about 50% of the campaign target has been reached.
Once again, I request you to donate, if possible.
Please.
People may feel they're not earning enough or are not rich enough to donate or feed strays. All I can say is you need a heart to donate, nothing else. Because the curbside tender coconut vendor on my street also shares a part of his lunch with them! The lady who works at the pet shop for a meagre salary feeds strays around her home every day! So yes, you need a heart to donate.

Also, donating to this place (directly, not through DonateKart) is also eligible to claim some income tax benefit too.
I'm sure there are so many of us who want to donate to a good cause, but are not sure or aware of genuine charities. Trust me friends, this place deserves your help.
ACT NOW!!!
To donate food through this drive: CLICK HERE
To donate directly to the trust: CLICK HERE
Visit the website to know more, or the Facebook page, or the Instagram page too!
And finally, to share this post CLICK HERE
PS: We got three pups treated here. Unfortunately one of them could not make it, but the other two were looked after so well at ACT, they managed to get through. Massive respect to the TEAM, yet again.
DISCLAIMER: NOT A COLLABORATION.
I am in no way connected to the running of ACT, nor have I been asked to write this post. I'm doing this purely because I want to help someone donate if they've ever wanted to, and to try and help in whatever way possible, so that those little cuties at ACT don't go hungry!
Reflections Thoughts