on Tuesday, July 28, 2020
Zero waste lifestyle
A very catchy phrase today, more so with celebrities endorsing it. Sounds cool, doesn't it?
Yes it does. And what's more, the more you think about it, what you finally come to realize is that it's actually nothing new to the Indian way of living.
Not convinced? Let me give you an example. Every typical South Indian home will have a couple of coconut trees. Obviously the coconuts are consumed, but that's not all! The large leaves are used for a wide variety of purposes, similarly the husk is used too. Basically, each part of the tree is made use of giving it the tag of Kalpavriksha; in today's fashionable parlance we call this the 'Go Green' concept!
Enter a traditional Indian kitchen. Except for a few things here and there, the major material used for containers and other utility ware, till recently would either be steel or earthenware. And most of the jars would be made of glass or would be those beautiful traditional Bharni jars. Re-using is the way of life. Enter the microwave - which brought along with it those cheap supposedly microwave friendly plastic ware. (I'm a Tupperware collector myself!)
Speaking of the kitchen, a true zero waste lifestyle enthusiast should spend a few days observing how a middle class Indian lady handles her kitchen. It is routine practice to dunk certain veggies in salt and/or turmeric water before cooking. Water used for cooking is channeled in such a way so as to feed the vegetable patch. Every meal, every single meal is meticulously planned. The concept of ready-to-eat does not exist.
What is cooked is done with a precise measurement to avoid wastage. And in case something does end up in excess, the next meal will be planned so as to make use of the leftover food; for example excess cooked rice will be used to make dosas next day, extra batter will be "upcycled" into a different batter. And the kitchen waste, most of it, goes into the garden into the soil. Old clothes are used for something else, and then something else, and finally end up in kitchen to wipe down things!
Upcycled. That's the fancy term invented for something that's being done since ages. Only thing is till now, this practise didn't have a name.
Eating habits
This is something I've wanted to write about for long. Traditional Indian food, whatever part of India we talk about, is an elaborate affair. Most of the ingredients used, whether vegetarian, dairy or non-vegetarian, are either fresh or sun-dried or at times, pickled. The concept of processed food, ready made sauces, heat and eat preparations, or for a very traditional grandmother, even masala powders, have a very very minimal role in routine cooking.
Use of various spices and condiments in the right amount, means a good source of antioxidants. Also, what is cooked is consumed on the same day, or at max, the next day. Freezing cooked food and consuming after weeks or months is still frowned upon. Many items consumed are in accordance with the season and the region too. A basic Indian meal would have most of the required proteins, carbs, fat, fibres and nutrients as well. 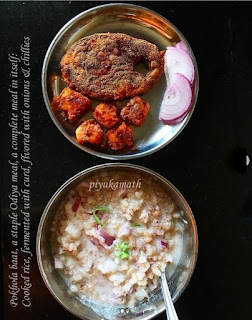 Pokhola baat, a humble Odia dish, a complete meal in itself
Turmeric. This of all things is THE reason, that prompted this long rant. Turmeric is a basic ingredient in the Indian kitchen. Whether it is to soothe an inflamed area externally, or mixed with hot milk to consume for an inflamed throat, or used in most non-vegetarian dishes as an antiseptic, turmeric is used everywhere! But it's only when the Americans "discovered" the benefits of curcumin/ Golden Milk, that some of us realized the value of this substance.
Jaggery and molasses were the traditional sweeteners till sugar arrived. Filter coffee with jaggery is still consumed routinely in many South Indian households! Tamarind, kokum, bimbli, or raw mangoes are the traditional souring agents, not vinegar. There are so many other examples as well. 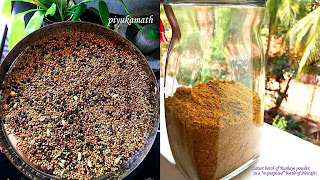 Latest batch of Kashay powder at home, stored in a 're-purposed' bottle of Nescafé!
Kashaya or Kadha is an Ayurvedic traditional drink made in a variety of ways using a combination of spices and herbs. The ingredients vary according to the need and illness. A routinely consumed kashaya at home just like tea/coffee, twice a day, is this version. No, it's NOT a cure for corona. It is just a prophylactic drink to build immunity and keep common cold at bay!
These are the some of the many traditional practices that ensure the food we consume is rich in most essential nutrients.
Today, thanks to the ready to cook stuff available, or the fancy foods that look oh-so-cool, (Hey, I love thin crust pizzas too!), eating habits are changing slowly. A healthy balance of both types of eating would be ideal.
Please do not get me wrong; this is not a post glorifying every single thing Indian no matter what - this folks, is pure Science.
So all said and done, are we re-inventing the wheel today, when terms like organic and natural are widely used? Why not try and incorporate at least some of the practices that our Grandmothers did everyday, without knowing the science behind it?

Why did it take a pandemic to make these routine Indian practices gain worldwide acceptance?